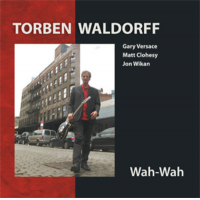 Guitarist/composer Torben Waldorff has released a number of penetrating recordings, including 2008's Afterburn and 2010's American Rock Beauty , both on the musician-driven ArtistShare label. They are shaded with top-notch musicianship, fresh perspectives, and one elusive quality: the art of being copacetic, where the music evokes a sense of cool that's not just defined by chops or technological devices but, more so, with a vibe that feels relevant and evocative. Wah-Wah is further proof of the Sweden-based guitarist's abilities.

Waldorff expresses composure and lyricism in the vein of Kurt Rosenwinkel, one that's less concerned about blistering runs (of which he's capable) and more about melodic constructs and composition. This continues to be one of his traits; the sexy, suggestive tone of "You Here" leads to a soulful outro with frosty Fender Rhodes and scintillating drums. The absence of saxophonist Donny McCaslin, who performed on Waldorff's previous two releases, is missed only in the slightest, as pianist Gary Versace's joins the guitarist's longtime superlative rhythm section of bassist Matt Clohesy and drummer Jon Wilkan. The set remains magnetic.

The tunes possess story-like attributes present in the smooth opener "Circle and Up" or delivered via smoky organ grinds in the bossa-nova tinted "Poolside." In each track, the group weighs melodic phrasing with tension and release, through evolving song narratives. Yet there's always a sense of openness; music that can be enjoyed casually or mined deeper for its artistic qualities. That "cool" factor presents itself repeatedly, whether in the grinding hook of "Evac"'s closing or Clohesy's spicy electric bass line in "Fat#2," as Waldorff shreds notes.

Though Wah-Wah departs from the rural themed American Rock Beauty , the set closes with the beatific "Country and Fish," bringing to mind a peaceful country setting. It's a picturesque backdrop where Waldorff's soulful phrases are carried by Versace's supple organ touches on a languorous current. It's another fine release from a guitarist who merits wider recognition.