By GARETH THOMPSON
November 23, 2018
Sign in to view read count 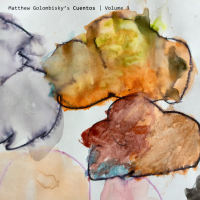 At the tender age of four, Isabella Golombisky shows the promise of a young Kandinsky. Her artwork adorns this inspired release from her father, Matthew, wherein she uses colours not contained by lines, and gives priority to form over content. Or maybe it was a jolly good splash at the kitchen table. Either way, 'Izzi' is clearly a singular talent, but then so is her dad.

Raised in North Carolina, Matthew Golombisky was doing a composition Master's in New Orleans when Hurricane Katrina struck. Along with drummer Quin Kirchner he moved to Chicago and fell into the city's vibrant culture of collaboration. Now resident in Buenos Aires, he also founded the laudable ears&eyes record label.

'Cuentos' being the Spanish word for short stories, one senses the influence of Golombisky's new homeland in this collection. Each piece seems to inhale the country's slums, swamps and vibrant street life, then breathe it back at the listener. As with all good short stories these narratives are left teasingly poised, allowing an audience to join the final dots. Thus the track titles are merely numerical, like a series of nameless roads on a map. Enter the labyrinth at your own discretion.

The previous two volumes in this series featured cello, guitar and vibraphone, but now the emphasis is firmly on brass. Trumpet, tenor sax and trombone parts are sustained by Golombisky on bass and Kirchner's inventive percussion, with a dash of art pop.

Just as the instruments find warmth and presence in each other on the closing bonus tracks, so they jostle like strangers elsewhere. "Cuento #16" and "Cuento #18" are so full of unresolved tensions they almost dare our ears to flinch. No wonder Golombisky thought about releasing these scores to the public, describing them as "pretty interesting visually." More euphonious by far is "Cuento #13" with its romantic hint of decadent decay. "Cuento #14" then finds a bluesy air, like some lullaby for a city that never rests. Next up, "Cuento #15" kicks out in the style of an overture, all snappy, catchy and cosmopolitan.

Taking a deep elegiac tone, "Cuento #17" is largely a showcase for Kirchner. He conjures a protest of sounds that could be field recordings, samples, or plain organic percussion. Later in the piece he bashes like someone exorcising their demons, yet there's a real skill in performing that way. It offers a fascinating dichotomy. Kirchner takes the ordinary here and adds enchantment; a childlike energy to brighten dark reality. Fitting enough on a project where the cover visual is so frank and simple.

In its quest for the authentic, Cuentos Volume 3 is super stylish and historically acute. Rich in urban lore, it roams across chaotic lands to excite our mind's eye.