Brian Auger: Voices of Other Times

By Michael Askounes
September 1, 2000
Sign in to view read count 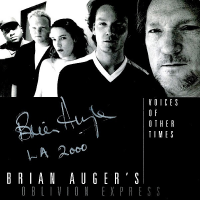 Londoner jazz staple Brian Auger has had a long and distinguished career dating all the way back to the early 60's English jazz scene. The list of players that have shared the studio/stage with Auger reads like a who's who of modern jazz-fusion. Given his pedigree, the last thing I expected when cueing up Brian Auger and the reformed Oblivion Express' latest CD Voices of Other Times was boring, overly clichéd "smooth jazz" with mediocre instrumentation. But unfortunately, that is exactly what I got.

Voices of Other Times is a mix of new material, updated versions of some of Auger’s old material, and covers of tunes from the likes of Richie Havens and Marcus Miller. Despite the disparate origins of the tracks on the CD, somehow the band manages to homogenize the different styles into a “generic jazz” package that neither impresses or stimulates. The playing on the CD is surprisingly uninspired – Karma Auger on the drums and guitarist Chris Clairmont seem to be bored with most of the material, and bassist Dan Lutz fills the tracks with slap-bass, easy-jazz clichéd riffs. Even Brian Auger’s keyboard work is seems quite mundane and lethargic, which is quizzical considering how long he’s been around. He’s does have some high points when he’s riffing on his Rhodes electric piano, but for the most part Auger doesn’t really break any new ground here.

All that said, there are some bright spots on Voice of Other Times. The vocals of Brian’s daughter Savannah Auger are fantastic, and when she sings she automatically kicks up the quality of the track up a notch or two. Her voice takes sensuality and converts it directly to sound waves, carrying with it the same dulcet qualities as the “Queen of Smooth” Sade,—very pleasing to the ear. Another high point on the disc is the final track “Jam Side Down,” which is the only track written by all the instrumentalists in the band. After sleepwalking through first nine tracks, the band all of a sudden comes up with a very cool free-form jazz jam that features some killer bass licks from Lutz and very tasty keyboard runs from B. Auger. After listening to this number, you’ll surely wonder why the heck they didn’t play like this on the rest of the CD.

Unfortunately, sweet vocals and one interesting track does not make Voice of Other Times a worthwhile musical experience. You’d be better off just tuning in to your local “smooth jazz” radio station – you’ll hear pretty much the same stuff, and you won’t have to buy anything. All in all, this is a very disappointing effort from an established performer... one would have expected better.

It Burns Me Up; Isola Natale; Voices Of Other Times; Splatch; Indian Rope Man; Soul Glow; Victor's Delight; Circles; Never Gonna Come Down; Jam Side Down;