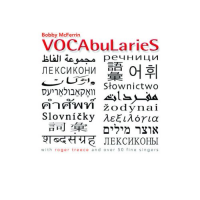 For nearly thirty years, Bobby McFerrin's illustrious career has proven that there is no instrument like the human voice. With an ability to cover any vocal range, his spontaneous inventions have spanned inventive a cappella singing, wonderful mimicries and global dialects, through memorable performances and recordings with the likes of the Vienna Philharmonic, Yo-Yo Ma, Chick Corea, and Herbie Hancock, or demonstrating the power of the pentatonic scale at the 2009 World Science Festival. A true virtuoso, McFerrin is far more than just the pop sensation who delivered to the world his signature 1988 hit song "Don't Worry Be Happy."

VOCAbuLarieS comes eight years after McFerrin's previous recording, and it is his most challenging release to date. It is one that incorporates the ten-time Grammy winner in collaboration with over fifty vocalists through the meticulous technical guidance of composer/producer/singer Roger Treece, a member of McFerrin's vocal ensemble, Voicestra. Seven years in the making, the project includes a diversity of voices recorded in small groups to create a "virtual choir" with over 1400 vocal tracks and lyrics in multiple languages.

As the liner note aptly states, this is "through-composed music that's got groove." The seven compositions are all defined by their playfulness and infectious rhythms, as well as their unique vocalizations and interplay. With dazzling harmonies and multiple progressions, songs such as "Baby" and "The Garden" (taken from McFerrin's unappreciated yet brilliant Medicine Man (EMI, 1990)) are like pieces in a quilt. Each section is detailed and when woven together forms a more elaborate work.

McFerrin's interest in diverse cultures is evident throughout. "Wailers" is akin to an African safari where voices traverse different kinds of terrain. "Messages," built around a simple ostinato, contains the referenced lyrics from Arabic to Zulu, creating a veritable utopia of voices. "He Ran To The Train" is a stunning combination of two songs from the aforementioned Medicine Man, "He Ran All The Way" and "The Train" which embodies heart-pulsing syncopation, call and response, and McFerrin's magic touches. The project concludes with the angelic "Brief Eternity," where voices and lyrics intersect blissfully.

Take McFerrin's spellbinding one-man-show, involving audiences, singers, and artists into his exploratory playground, and multiply it. VOCAbuLarieS is the result.