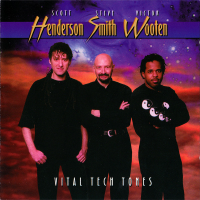 Mike Varney wanted a powerhouse release to inaugurate his “Tone Center” fusion offshoot of Shrapnel Records. He of course thought of some of the very best artists to pull together for this project. I need not go into detail over each artist’s abilities. One or two words says it all — awesome monsters. For those of you who don’t know, Scott Henderson gets around. With his fine self-formed band Tribal Tech he has released a string of awesome fusion and solo’ed a few hot blues releases. He has worked with Chick Corea, Jean Luc Ponty, Jeff Berlin, and Joe Zawinul. Steve Smith is one excellent drummmer, having worked with Journey, Jean Luc Ponty, Steps Ahead, Randy Brecker, Allan Holdsworth, Frank Gambale, Stanley Clarke, Stu Hamm, and many more big names. His Vital Information group is his main jazz project. And who is Victor Wooten? He is the magical low end for Bela Fleck and the Flecktones. He too has released superb solo works. So how do these guys do jammin’ together?

I suppose the summary phrases could be: ‘90's fusion, relaxed jazzy finesse, bluesy funked rock jams, room to stretch, great musicians having fun — playing what they want — no genre limits here. Only on their cover of Coltrane’s “Giant Steps” is there a guideline and even here they augment, interpret, solo, and play their own brand of tribute with fluid ease and perfection. Ah yes, they also cover Henderson’s “Dr. Hee” from an ancient Tribal Tech release —with a new twist.

For a chance to hear Wooten and Smith boogie down, sample “Two For One”. To hear Henderson go ballistic into the nether regions of fusion, skip tracks to “Lie Detector”. Smith and Wooten were being pushed to speeds where trance-state/ reflex muscle-memory action takes over and the mind quits tryin’ to analyze the next step. Wow! For in-your-face bluesy explosions of guitar in that SRV/Michael Lee Firkins feel, (but way cranked up!), check out Henderson abusing his wah-wah on “King Twang”. My favorite track overall, for inspired, “breaking-outta-the mold”, dreamy Holdsworthian intro, otherworldy mystique, and eerie atmospherics is “The Captors”. It sounded a lot like things Henderson was doing with Tribal Tech on Reality Check. Henderson’s solo, with distorto-alternate-dimension, guitar work reminded me of the sound-worlds John McLaughlin was offering in his guitar-synth experimentations. Superb, superb, superb!

Yeah, there are some tunes on here that didn’t make me go “ga-ga” — great musicianship but song composition left my mind adrift. But overall this release is a winner. Recommended. This has been a fun ride. I bet they do it again!