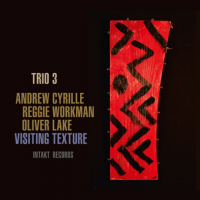 But once back to basics, they certainly make the most of the inherent opportunities. Looking back, you can see the attraction of having a pianist exploit pockets of space in the overall fabric, but by keeping intact the ambiguity such spaciousness confers, the rewards are even greater.

So much so that it's difficult to pick out the single collective piece from the six compositions contributed by individual band members. That's because often they merely sketch out the written material, which gives a delicious feel of hidden structure without revealing too much of how it's achieved.

Lake's "Bonu" offers just one case in point. After a wiry theme over cymbal splashes and resonant bass counterpoint, comes a sense of the three masters listening but not trying to stay on same path, like independent dancers choreographed in real time, creating a whole which is satisfyingly more than the disparate parts.

Each of the spectral constructs proves the product of consummate, often freeform, interplay. That ensures all the more impact when they do play it straight, as on the sole ringer, Ornette Coleman's "A Girl Named Rainbow." Here Lake forsakes his normal expressive use of timbre with gruff asides, squealing fusillades and querulous split tones, for a tender rendition full of false fingered notes which add emotional weight to what translates as a heartfelt tribute.

Elsewhere Cyrille induces his drums to talk, and even sport, on his unaccompanied dedication to Max Roach, "7 For Max," while Workman's taut bass forcefully cajoles and interjects, nowhere more so than on his title track, which also includes swooshing wind effects, bringing this splendid outing to a close.