Vijay Iyer Trio at Brooks Center for the Performing Arts 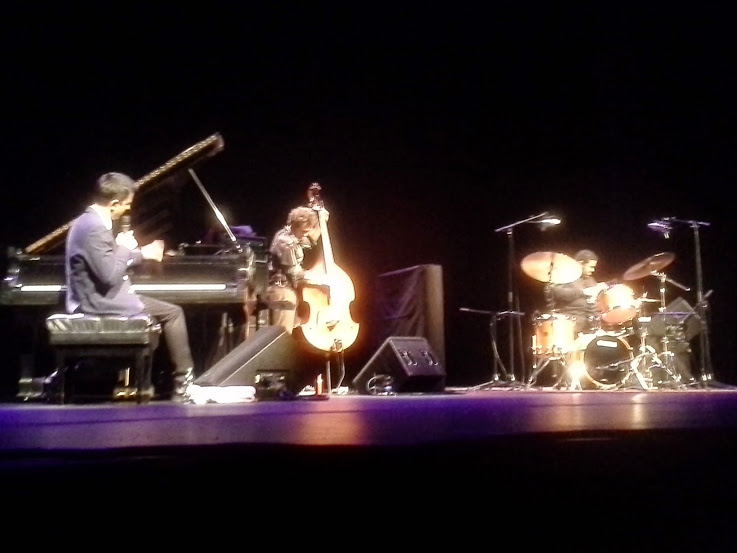 The Vijay Iyer Trio's performance at Clemson University's Brooks Center for the Perfoming Arts was the first jazz programmed as part of the long-running Utsey Chamber Music Series. As the presenter pointed out in her introduction, most jazz is technically chamber music: one player on a part. When the band took the stage Iyer greeted the crowd and announced a late change to the personnel listing in the program: Tyshawn Sorey would be subbing for longtime Trio drummer Marcus Gilmore (which apparently has been done before). Sorey had also played on Iyer's Blood Sutra (Artist House, 2003), and they have an association with saxophonist Steve Coleman in common. We were told we'd be hearing some old tunes, music from the forthcoming ECM release Break Stuff, and "some things you know."

There was no hesitation as the group launched into their first long set of music, a group of songs played without pause that lasted more than half an hour. The Trio demonstrated their full range: very high energy, but also capable of quiet, reflective passages and melodic playing. The set included "Geese" (from the Open City suite), "Lude," "Break Stuff" (title tune from the ECM album), and concluded with Thelonious Monk's "Work" (in his back-announcement of the set, Iyer quipped that the Monk title came from the way you have to work to play it).

Iyer introduced the next selection, "Our Lives," as a very old tune written when he was about twenty ("a long time ago, " he joked). Then the group launched into another long set, which included Henry Threadgill's "Little Pocket Size Demons" (from Iyer's album Accelerando (Act, 2012)) and "Hood" (a tribute to Detroit techno pioneer Robert Hood) from the new album. Iyer next changed the pace with a solo version of Billy Strayhorn's "Blood Count," another preview of Break Stuff.

Iyer has a reputation as a knotty modernist: Thelonious Monk is a clear reference, as is Henry Threadgill. But the inclusion of a Billy Strayhorn tune shows his roots in the jazz tradition, as well as demonstrating how approachable his playing can be. And bassist Stephan Crump's animated performance should be proof enough that the musicians are feeling the music. This was a free concert offered as part of a chamber music series, so it is reasonable to assume that many of the members of the full house on this evening were previously unfamiliar with Iyer's music. But they were a generous and supportive audience; there was no mass exodus, even when the sound was at the most abstract or dissonant. In addition to exposing people to contemporary jazz at its finest, the Vijay Iyer Trio hopefully made some new fans.