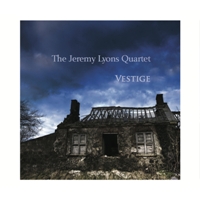 It's been a good year for Jeremy Lyons. In March, the Belfast tenor saxophonist's dectet opened the Brilliant Corners 2014 jazz festival with a resounding set before an enthusiastic home audience. Here, stripped back to the more intimate surroundings of a quartet, Lyons' debut as leader brings together seasoned pros from the UK jazz scene on a set of his original compositions that are straight ahead in conception. The rhythm section of bassist Vicky Tilson and drummer Buster Birch is both empathetic and energizing, buoying and cajoling the lead lines pursued by Lyons and guitarist Ben McDonnell.

Lyons took the jazz course at Leeds College of music before studying with Mark Lockheart (Loose Tubes/Perfect Houseplants/Polar Bear/Blue Touch Paper), so it's not entirely surprising that his sound is contemporary and with few obvious references stylistically. If the music owes any sort of debt to the American tradition then it's of the more modern kind espoused by John Scofield and Kurt Rosenwinkel. Scofield's DNA colors the punchy opener, "Memory Jog," with McDonnell's biting improvisation teasing rockers and jazzers alike. By contrast, Lyons measured response is sparse and mellifluous. Tilson's dancing solo maintains the forward momentum, setting up Birch for a rattling feature over a repeated saxophone and guitar motif.

The title track is a more relaxed affair with the rhythm section treading lightly as first McDonnell and then Lyons take extended, tasteful solos. Throughout the set Lyons sits out during the guitarist's improvisations, whereas McDonnell is an ever-present comping presence. Rhythmically, McDonnell's chordal prompts help propel the music and his subtle voicings are a delight—particularly on Kenny Wheeler's delicate ballad "3/4 in the Afternoon"—but his constant presence in the end brings a certain sameness to the textures, regardless of tempo.

Lyons has a deep well of good melodies; memorable, whistleable heads and catchy motifs color every tune. Even when a series of solos dominate a track—as on the mid-tempo "Think Yourself Lucky"—it's the tune's defining melody that sticks in the mind. Whilst the solos are first rate they never overstay their welcome, creating a balance between compositional flow and temperature-raising interludes. The quartet has a spring in its step on "Old Guard," with the industrious Tilson and Birch central cogs in the action, even if it's the saxophone and guitar combo that takes the plaudits.

"Look for the Signs" similarly moves with a relentless forward momentum. The breezy head belies the rhythmic urgency and the energy in the quartet playing. Lyons and McDonnell are both in expansive mood on this lively workout. The atmospheric "Outlet" works the gears, threatening on occasion—without quite igniting—to burst into flames. The brushes-led, appropriately titled "Low-Key" closes the set on a ruminative note, with guitar and saxophone drifting across each other's wavelengths in a slow waltz.

This impressive debut, elegant and heartfelt, holds the promise of greater things to come. Lyons evidently possesses the tools to create something truly edifying and with Vestige he lays down solid foundations to that end.