By Nenad Georgievski
July 26, 2014
Sign in to view read count 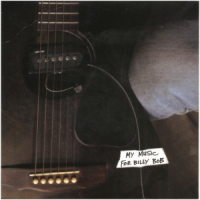 Translating guitarist/producer Daniel Lanois' evocative guitar and ability to create stratified soundscapes into soundtrack music for actor Billy Bob Thornton's directorial debut Sling Blade may seem an unusual choice, but the outcome turns into an interesting and unique blend of his darker, moodier incidental guitar and a variety of other instrumental touches. Lanois' music has always been about mood and ambience and other people have benefited from his unusual gift of capturing or creating all kinds of ambiences. This multitalented musician, thinker and a driving force behind the creation of many great records is a creator of sonic witchcraft. His ability to stir emotions through unclassifiable and distinct soundscapes has leaked onto his regular records and it was inevitable for that talent to be used on creating soundtracks, including the soundtrack for Sling Blade. Thornton wrote this movie, directed it and played the main character, and in 1997 it was Academy awarded for Best Writing, while he himself was nominated for Best Actor in A Leading Role.

Apart from contributing songs from his song records for certain movies, Lanois has done some notable work in the field of soundtrack music, like the music for For All Mankind (EG, 1983) with the Eno brothers and The Million Dollar Hotel (Interscope, 2000), as part of the Million Dollar Band. What Lanois has brought to this soundtrack is his own unique sound and personality. Thematically, there are no real recurring elements which can be pointed to as a "main theme" or central melodic identity. Instead, Lanois is more concerned with textures and moods, thus creating mostly a sense of gloominess and despondency through the music.

Minimalistic yet expansive, his sound design expertise pulls the soundscapes together into a delightful and quirky package. Apart from the film for which it was meant to get into dialogue with, the soundtrack has the feeling of exploring forgotten landscapes of both inner and outer worlds. Evanescent and allusive, the opening track "Asylum"encircles and disorients with ominous drones tailing streaks. This track and the following "Omni" and "Phone Call" lull into the twilight of consciousness. It starts with mere melancholy, and the blues get progressively darker as the atmospheres unfold and spread out.

But the whole soundtrack is more than just a catalogue of textures and processing systems. A key move is the mixing of performers he has brought to the effort which contribute to the variety of moods and tempos. Not everything is dark and gloomy— "Jimmy was" has a slight funk feel, Lanois' style. The "One I Love" with its folkish and echoey guitars is melodic and melancholic while "Nicky" is more ethereal with its long and fluffy melodies that interplay with the piano. Even though the pieces develop fast, the score works like a patient, engaging ambient record with a dramatic arc that works independently of the film.

As the score progresses, the arc of this sonic journey rises to a friendlier terrain with "London" and "Willie Brown." "Moon Dog" is a solo guitar track with found sounds in the background, and the beautiful melody will later be used for another song written by Emmylou Harris for her record Stumble into Grace (Nonesuch, 2003). The soundtrack closes with two songs, with Emmylou Harris chanting "Shenandoah" and an old Lanois' song from Acadie (Anti, 1989), "The Maker." The Sling Blade soundtrack, is wonderful, even without the visual images it has been created in union with.