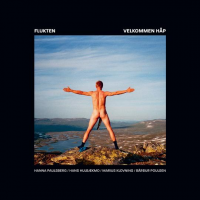 The first thing that may strike you about Norwegian quartet Flukten's debut album is the sleeve art. This shows a naked man with his back to the camera, limbs spread wide and with something dangling between his legs. It looks like a penis, but smaller.

Stylistically, Flukten inhabits a similar bag as Britain's Partisans quartet. The lineup is the same—saxophone, electric guitar, acoustic bass, drums —and the music, though ultimately beyond category, can, like that of Partisans, be described approximately as jazz rock played with a jazz rather than rock sensibility. Flukten differs from Partisans in being looser and less intense, and by favouring spontaneity and group interaction over through composition and tricky arrangements.

Flukten's USP is its playfulness. The same quality distinguishes Hanna Paulsberg Concept, whose most recent album, the highly recommended Daughter Of The Sun (Odin, 2018), though dealing with some serious issues, never takes itself too seriously; a playful mood is established early on and is maintained even as the group pay tribute to the Ancient Egyptian pharoah Hatsheput and all other women who, as Paulsberg put it in the liner note, "have had to fight harder for recognition because of their gender." Having a woman in the lineup seems to encourage playfulness in jazz and it is noteworthy that another tenor saxophonist, Ingrid Laubrock, though capable of being as cerebral as Albert Einstein, can bring an infectiously childlike sense of fun to her playing when she is in the mood.

Most of the tunes on Velkommen Håp were written by Hulbækmo, with two others from Klovning, one from Paulsberg and one group collaboration. There are two ballads, one piece of out-of-time free improv, and the remaining seven tracks are motor rhythm-anchored essays in jazz rock with the emphasis on jazz. It is all big fun.