While some may question such a laborious document, the evolution of the material from night to night is revelatory. 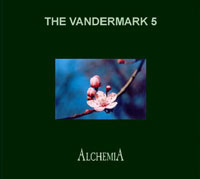 When Ken Vandermark was awarded the MacArthur Genius Grant in 1999, a lot of eyebrows and questions were raised. Past jazz oriented recipients had included such luminaries as Ornette Coleman, Steve Lacy, Cecil Taylor, and Anthony Braxton; Vandermark's name carried little recognition outside of select circles at that time. But the MacArthur Fellows Program was designed to award those "who show exceptional merit and promise of continued creative work. And their investment in Vandermark has paid substantial dividends.

Two years beyond the final stipend, Vandermark has galvanized his name as a premier player on the creative music scene. There are so many different boundary-pushing musicians performing in today's musical world that it is extremely hard to label someone as the one person in jazz making the largest impact in today's musical landscape like the giants that have come before. But just as Ornette Coleman and John Coltrane pushed the accepted standard of what constituted the sound of jazz and the conceptions that were eventually accepted, Vandermark is making similar strides through performing and documenting music that is thoroughly modern and in the present.

The Vandermark 5 is easily his most well-known and stable vehicle of expression. Comprised of Vandermark, reedist Dave Rempris, trombonist Jeb Bishop, acoustic bassist Kent Kessler, and newest addition as of two years ago Tim Daisy on drums, they have forged a unique sound and identity. And eventhough it is through the collective that informs everyones improvisational choices, it is Vandermark the bandleader that steers the ship. Regularly documenting his own compositions almost exclusively on records and occasionally releasing live documents of free jazz standards from composers/performers such as Archie Shepp, Sonny Rollins, Rahsaan Roland Kirk, Muhal Richard Abrahms, etc; the Vandermark 5 has continually been one of the more engaging working groups of the last seven years. And although they may not be the originators for everything they are known for, just like the forbearers of before, they are the ones that have really exposed the audience at large to them.

Never is this more evident than on a limited edition twelve-disc document from Not Two Records called Alchemia. Recorded beautifully over five consecutive nights in Krakow Poland in the club of the same name, the group continually pulls new ideas from songs they have been performing for years as well as developing new songs on the stage (the set also contains a couple of premiere performances) with more than a handful of covers thrown in.

The packaging for the set is on par with the music. Housed in box slightly smaller than lp size, the individual cds are housed four to a placard revealing photographic images underneath each cd. Although they are beautiful, like a lot of box sets, they are somewhat impractical when it comes to common usage. The booklet is magnificent and is similar to those found in a Mosaic or a complete OJC set but with a little more flair. Individual album information is interspersed on smaller pages as are some photos not unlike what you would receive from your local photo shop. Included is a very good interview as well as a letter from Vandermark, both of which can be viewed in their entirety online (typos and all). Each disc represents a set with two sets a night and as the week continues forward, the crowds seem to become more and more caught up in the sounds being created.

Ranging from the seemingly reckless all out solos of "Confluence, a medley of Rahsaan Roland Kirk tunes from Rip, Rig and Panic, a melancholic to free abandon "Camera in only it's second performance live, to the lyrical straight ahead sense of "Both Sides with it's walking bass line and floating trombone work, to eventually the funky groove of "Knock Yourself Out and it's start stop timing— Vandermark pushes to include numerous elements of music all in one set (this here being disc three), and sometimes even in the same song. And of course, the music is above board throughout.

It's this all inclusiveness that sets the Vandermark 5 apart from most other groups performing today. Listeners with an ear towards one type of style are more inclined to be open to others when incorporated successfully as is the case here for the most part. Nonetheless, this only works because of the adaptive abilities of the members of the Vandermark 5.

Alchemia breathes with a liveliness often missing in a lot of live recordings. Although the bottom end could be emphasized a little more, the recordings have a strong spatial feel. When Vandermark or Rempis whisper, the sound from your speakers is just as soft. And when they cry, your speakers become just as vibrant. It's interesting that most live documents don't employ the same standards, but it does require more of the listener, especially when Kessler is soloing.

Of special interest is the inclusion of the final two discs of material featuring local musicians Marcin Oles and Bartlomiej Brat Oles (and local certainly does not mean they are not world class). The two brothers (the former a bassist while the latter is a drummer) offer an interesting cool down from the seemingly endless supply of music from the Vandermark 5's week long engagement. Ranging in size and instrumentation, these final discs include more covers and a wealth of free improvisations that are more spontaneous compositions rather than dissonant blowing. One of the most intriguing of these, and indeed another highlight of the entire box is "Free Jam 5. A slowly evolving meditation based somewhere near the blues cannon but without using the idiom's standard forms, everyone involved is relaxed and languid in building their solos. Quiet invention permeates from every measure and slowly they build a sense of quickening energy that contributes to the story of the moment. Although technically not part of the concept of recording the week long engagement, the final discs provide another way of evaluating and enjoying members of the group and their malleability with other musicians, and present another highlight of performing on the road.

Touring in general has long been a huge reason why the Vandermark 5's fan base has grown so exponentially. And one of the beautiful things of seeing a band such as this regularly in a short period of time is listening to how they work through their book. How they add and edit compositions, learning how they commonly phrase certain songs in certain sections to reflect their ideas and moods. Even how the whole germ of an idea can change from night to night to find how it works and fits in with the musicians.

Furthermore, while some may question such a laborious document, the evolution of the material from night to night is revelatory. One such instance is Vandermark's "Camera which receives its debut performance in the second set of the opening night. Over each consecutive night, four subsequent renditions are performed and one can discern how each of these musicians becomes more intuitive in how they work the material. From sounding clunky or somewhat unsure in their original performance, working through sections that apparently had not been fully developed, to complete cohesive fluidity between the members later that week, the process is illuminating and something most listeners are not privy to otherwise. (And it will be interesting to see how it shapes up for their newest release on Atavistic, The Color of Memory, due out September 13).

And this is why a box set from a group like this is an important document and not just a bloated discographical/completist set. Because when taken as a whole, Alchemia feels somewhat akin to many great boxes of extended engagements from artists such as Art Pepper, Bill Evans, or even to the seminal Miles Davis Complete Live at the Plugged Nickel recordings. Although some may speculate how this line can be drawn, it's important to look at their place in the respective bands history. Both document a group working through material—set to set and night to night—while solidifying stylistic improvisational and conceptual ideas being ingrained in the jazz vocabulary of their day. Alchemia presents a band that has come of age. Through constant touring from club venue to club venue, the Vandermark 5 has established an identity that is just as unique and relevant in modern music as Miles Davis had forty years prior.

It will be interesting to see where Alchemia will stand ten or twenty years from now. Either way, Vandermark has developed into a musician of considerable leadership skills and stature as this set demonstrates, and he's still under the age of forty. It seems the MacArthur Foundation made a wise investment in his and the music's future.

This limited edition set is available through Atavistic, Polish Jazz and the Alchemia website.