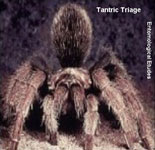 "Arthropod Aerobics" opens this set of musical movements with bass keys in rhythm interjected with shots of synthesizer; tonal and sound beings float on top of the structure causing fear and agitation. Buzzing, like being attacked in your sleep by menacing things like traumatic thoughts or the fear of being bitten, you are being threatened and whatever it is doesn't like you. And here we are, the post 9-11 current state of the world. This is much worse than being harassed or intimidated. Spiders are poisonous, and so is mustard gas or smallpox.

Cello begins "Centipede Crooner" in its wailing and is bowed to silence by an undercurrent of electric sounds buzzing and humming like bugs crawling out of the drain looking for something to eat. This music is deeply unsettling, extraordinary in the clarity of its message that the world could be a better place without mankind. Buzzing like the sound of fluorescent lighting, the scratching of bows against stringed instruments and microphones opens "Crumbledance," and you get the feeling that multi-legged creatures will rule the earth some day. This is their home and they were here long before we were.

The acoustic guitar was meant for other things than pop garbage, and Ernesto Diaz- Infante's scratching, scraping, and pulling at the strings give the impression that the bugs got to this one too! Diaz-Infante plays the violin as sound art, musical expression of the message that we as people don't belong... and the violin is played over Dick Metcalf's Kurzweill PC 88 creating undertones of light and sound, beckoning you into passages infested by things—sound things—that could crawl up and bite you, filling your arteries with venom, driving you from the face of the planet.

Menacing tympani drums accompanied by organ lines, fingers crawling, Matt Turner's bow scratches against the strings of his cello. With feedback things crawl with fangs and stingers prepared to deliver sharp, agonizing pain into the unfortunate soul who discovers them. Tones scream out from Turner's cello accompanied by buzzing like flying insects around a hot light bulb in the blackness of a dark night. The tympani drums dredge up horror and a radio comes on, familiar voices in the desolation. The buzzing fades but the creatures stay.

"Myriapodal Massage" opens with sounds like birds chirping—starlings, those birds brought to the US from England in the early 1890s that now infest the entire country. Are they eating some of those poisonous crawly creatures? Jazz-free drumming drives the undercurrent, everyone else is out of time. Dare we ask the question: So is the human race? Out of time, like the scratching of the cellist's bow against the strings.... Buzzing is accompanied by chirping, like bugs in a frenzy being feasted on by starlings. One guy yells piano and what a run this is. Chordal depths and lyricism bring fear out of paranoia and into avant-classicism.

As the sound of music fades, the fear of what is to come of the world lingers. Turner, Diaz-Infante, and Metcalf are successful in delivering a fine quality piece of music that leaves the listener in question of the integrity of his/her own mortality and existence.