By DOUG COLLETTE
September 3, 2016
Sign in to view read count 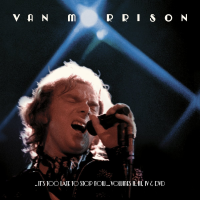 The announcement of the archiving of Van Morrison's considerably lengthy discography through Legacy Music no doubt generated cautious optimism among his fans and musiclovers in general. Previous reissue initiatives consisted of straight remasterings with minimal bonus additions in any form, while the retrospective of thirty unreleased recordings called The Philosopher's Stone (Polydor, 1998) seemed like a concession to the inevitable in the CD age.

But the release of The Complete Them 1964-1967 ( Legacy, 2015) augured well for future releases. Not only was it a truly comprehensive collection of the group's recordings from every phase of their career, including the later period when Morrison was the only remaining member from the original lineup, Van even provided a liner-note essay reflecting on this period of his career (although, to be fair, it may have taken as long to write as it does to read).

There is no such content accompanying the second vault titles of Van Morrison, but it is worth arguing no such material is necessary and might in fact be perfectly superfluous given the music contained therein. The reissue of the original live album It's Too Late to Stop Now is supplemented by a separate package containing three more full-length cd's from the same 1973 tour, plus a DVD with a full hour of performance from a concert at The Rainbow Theatre in London. Although no further affirmation was really necessary, here is where Van Morrison's performing legend lies in 2016, more than five decades from the start of his career.

While there is some considerable overlap of material within this sequel itself, the repetition of songs not only gives insight into what material Van Morrison favors most (Sonny Boy Williamson II, author of "Help Me")) but also renders all-encompassing the broad dispersion of selections from his albums of the Seventies, like "Snow in San Anselmo" from Hard Nose the Highway (Warner Bros., 1973). Meanwhile, each compact disc in the new set comes from the shows roughly a month apart at the three different venues (LA's Troubadour, Santa Monica Civic Auditorium and London's Rainbow) that were the source of the original title.

While the recordings from the original have apparently not been remastered since the 2008 reissue (in double-jewel box rather than in 2016 digi-pak), the twelve-page booklet enclosed in the new similarly-designed, indigo-hued package confirms the mix for these additional volumes is fresh and, as with the original release, sans any overdubs to mar the lean, spacious blend of instruments that reveals practically as much nuance in the playing as in the singing.

In terms of Van Morrison's set-lists on the 2016 live collection, the interpolation of different songs is as notable as the aforementioned overlap and equally thought provoking is the expanse of material included. The Belfast Cowboy doesn't overlook any phase of his career here, pulling not just from recent and extended past, but from just before his commercial success in the Seventies, i.e., the critically acclaimed Astral Weeks (Warner Bros., 1968), and not just in the form of the tour-de-force that is the regular set-closer "Cypress Avenue" (which, it should be noted, as often as not includes intros of the band and some lighthearted banter that interrupts the mystic mood the performance conjures up).

"Sweet Thing" and "Like Young Lovers Do" suggest how comfortable Morrison was with his past at this juncture of his career, perhaps comparable to this current point in time in terms of his catalog reissues; that said, while it may be too much to ask for the auteur's reminisces, some factual text would be almost as welcome as historical perspective from knowledgeable scribes(likely candidates include 'Rolling Stone Magazine''s David Fricke or author Greil Marcus (who wrote the dense but nevertheless brilliantly analytic When That Rough God Goes Riding (Public Affairs, 2011)); to wit, are each of these discs the complete performance on the designated nights (as much as the full-length CD playing time, the initial introductions, clumsy as they sound, suggest is the case)?

The technical skill and sharp instincts of the Caledonia Soul Orchestra lend themselves tremendously to Van Morrison's deep level engagement throughout It's Too Late to Stop Now and not just in the spontaneity of the moment of his off-the-cuff singing as on "I Believe to My Soul." Their collective fluency allows for the deft inclusion of Morrison's own material like that and sleepers like "Moonshine Whiskey," from Tupelo Honey (Warner Bros., 1971) as well as chestnuts that pepper all these performances, not all of which anyone might readily associate with Van: given the Celtic iconography that runs through his compositions, "Purple Heather" makes perfect sense, but the likes of country icon Hank Williams' "Hey Good Lookin,'" the torch-song "Since I Fell For You" and standards such as "Buono Sera"(in a rousing Dixieland arrangement) are curve-balls arguably as sharp as "Bein' Green" from 'Sesame Street' !?!?

But then, as reaffirmed by titles of present day albums of new material Born to Sing-No Plan B (Blue Note, 2012 ) and Keep Me Singing (Caroline, 2016), the man knows his core strength as well as that of his accompanists at this early peak of his career. As much as his take on his own unusually auto-biographical "Wild Children" as his aforementioned homage to Kermit the Frog (also recorded by Frank Sinatra?!), Van Morrison's performances here with his band validate the truism: 'it's the singer, not the song.'

Recorded at The Rainbow Theatre in London for the BBC, the fifty-minute video presentation is professional in the best sense of the word, shots from various angles moving in time to the music, highlighting keyboardist Jeff Labes and drummer David Shaw's dual navigation of the arrangements as well as the more spontaneous interludes. The sound quality is something else again, clearly mixed for television broadcast, with a static quality to the levels that, in many instances, leaves background vocals and the charted horns too far in the background, even as the sound of the four-piece string section always remains properly in proportion.

As for Morrison himself, despite his regular acknowledgments of the audience and intros of the band, he is so caught up in the music, it's as if he's trying to keep the audience from becoming a distraction; that demeanor might be off-putting for some because it's somewhat difficult to correlate the depth of his vocals with his stiff body language, but it is nevertheless fascinating to realize how Van so often improvises in his singing, using his voice as simply another instrument.

His willingness to allow himself to become lost in the spontaneity of the moment may contribute to the sense of hurry that emanates from some of the performances, especially at the outset of this truncated performance. Some of this rush may be simply appropriate to the tune, as in the opening of "I've Been Working," or it may be Morrison's own impatience with the necessity to include crowd-pleasing numbers such as hits "Wild Night" and "Domino," before he gets to those numbers he really prefers, such as the Sonny Boy Williamson/Willie Dixon collaboration "Help Me."

But the version of "Moondance" on this DVD is as fully formed as the well-known studio version and, in fact, this collection of tunes is one of those suitable for Van Morrison's most devoted fans aa much as those casually curious about his live reputation (sullied by his own petulance somewhat in recent years: the cumulative force of It's Too Late to Stop Now Volumes II, III, IV & DVD will satisfy both demographics to the fullest.

CD 1: Come Running; These Dreams Of You; The Way Young Lovers Do; Snow In San Anselmo; I Just Want To Make Love To You; Bring It On Home To Me; Purple Heather; Hey, Good Lookin'Bein' Green; Brown Eyed Girl; Listen To The Lion; Hard Nose The Highway; Moondance; Cyprus Avenue; Caravan. CD 2: I've Been Working; There There Child; No Way; Since I Fell For You; Wild Night; I Paid The Price; Domino; Gloria; Buona Sera; Moonshine Whiskey; Ain't Nothing You Can Do; Take Your Hand Out Of My Pocket; Sweet Thing; Into The Mystic; I Believe To My Soul Cd 3: Listen To The Lion; I Paid The Price; Bein' Green; Since I Fell For You; Into The Mystic; Everyone; I Believe To My Soul; Sweet Thing; I Just Want To Make Love To You; Wild Children; Here Comes The Night; Buona Sera; Domino; Caravan; Cyprus Avenue. DVD: Here Comes The Night; I Just Want To Make Love To You; Brown Eyed Girl; Moonshine Whiskey; Moondance; Help Me; Domino; Caravan; Cyprus Avenue.