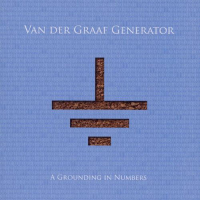 When, in 2005, Van Der Graaf Generator released its first album in over 25 years, the reunited group proved it was not only possible to go back, but that it could be done without sacrificing forward-thinking modernity. Inconsistent, perhaps, but Present (Charisma/Virgin) demonstrated, with "Every Bloody Emperor," a group still capable of soaring majesty and nightmare-inducing maelstroms. The subsequent tour, documented on the breathtaking Real Time (Fie, 2007), provided even clearer notice that VdGG was back, and with a vengeance. The classic lineup may have been showing a lot more gray hair—or in some cases, no hair—but this was no progressive rock dinosaur, going through the motions in capes and spandex. Still, when saxophonist/flautist David Jackson quit following the tour, leaving VdGG as a trio with singer/pianist/guitarist Peter Hammill, keyboardist Hugh Banton and drummer Guy Evans—founding members, all—most fans thought, regretfully, that it was over for good.

Instead, the remaining trio released Trisector (Virgin, 2008), and even the biggest skeptics had to admit that, despite the obvious loss of Jackson's colors, it was a far better—and certainly more consistent—album than Present. Three years of touring—again, documented on the equally stunning Live at The Paradiso (Voiceprint, 2009), and including a stop at the 2009 Montreal Jazz Festival—proved that VdGG could not only continue as a trio, but that it could actually surpass its previous work both in the studio and in concert, uncannily avoiding the seemingly inevitable calcification and sedimentation of time, and performing on spare, almost spartan stages with no visuals other than some effective and well-designed lighting. A Grounding in Numbers represents a number of firsts for VdGG: it's the group's debut for Esoteric Recordings; it's the first album, since its classic Pawn Hearts (Charisma, 1971),to involve an outsider in the process, in this case engineer/producer Hugh Padgam (Peter Gabriel, Yes, XTC, Genesis); and, most importantly, it's the group's best album since its early-to-mid-1970s heyday, easily standing alongside Pawn Hearts and Godbluff (Charisma, 1975) as a new classic in the group's 40-plus year history.

A Grounding in Numbers' 13 tracks—another first for VdGG, with only three songs breaking the five-minute mark, and a full five under three minutes—don't run continuously, yet there's a cohesion of theme and musical purpose that makes the album feel, instead, like a 49-minute suite, where the increasingly cathartic "Bunsho" references the opening "Your Time Starts Now," without ever entering the bombastic and self-indulgent territory of the dreaded "concept album." Hammill continues to explore personal matters—including the passage of time and approaching end of life, explored more thoroughly on Trisector but less pervasively so here—singing with as much unbridled power and vitality as ever; his lyrics sometimes direct, but elsewhere as oblique as always. Who, after all, would make a line like "P to the power of one-times-pi is minus one" the chorus to the appropriately titled "Mathematics"? A pianist capable of navigating complex arrangement, effortlessly conjoined with Banton on the interlocking contrapuntal lines that weave in and out at the start of "All Over the Place," his guitar playing remains paradoxically raw—more punk than prog on the potent mixed meters of "Embarrassing Kid." Still, on the softer "Splink," his warm-toned slide guitar demonstrates there's always more to discover in Hammill than might appear.

Banton continues to assume much of the group's sonic breadth, leaping between keyboards tones—largely organ but, with his modifications, far more texturally expansive—while concurrently working his bass pedals. Evans demonstrates even greater range than usual, from his gentle brushwork on "Your Time Starts Now" to the tribal toms underscoring the sonic interlude, "Red Baron." But it's together with Hammill—where the whole truly exceeds the sum of the parts—that they explore more raucous and rocky terrain than usual on the propulsive "Highly Strung," while building to an anthemic climax on "All Over the Place," ending the album on an unresolved yet absolutely perfect note.

Effortlessly cohesive, combining some of Hammill's most lyrical writing since Still Life (Charisma, 1976), and some of his most effectively layered vocals since Pawn Hearts, with the group's most unsettling, dissonant and unfettered music since that same classic album, the shorter pieces might suggest that this is Van Der Graaf lite; but while many of its songs can, indeed, be taken as separate entities, it's when they're taken together, in their full, 49-minute glory, that A Grounding in Numbers's biggest rewards are revealed. Other decades-old groups may continue to mine their past catalogs for legions of fans hungry for a bit of nostalgia, but Van Der Graaf Generator, instead, continues to create compelling new music that takes its innovations of 40 years ago into a new millennium. A Grounding in Numbers possesses everything that made Van Der Graaf Generator great back in the day, while its avoidance of so many of classic prog's trappings mean it remains relevant, meaningful and, most of all, vital.