By Nenad Georgievski
March 19, 2011
Sign in to view read count 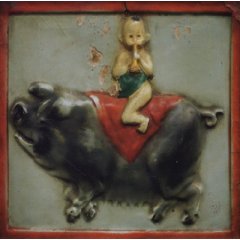 Not even a heavy motorcycle crash accident can prevent Daniel Lanois from doing what he does best, and better than most—making music or helping other people make music. He is simply bulletproof to whatever circumstances slap his face, be they bad or good. During his recovery period, after the intensive care following the accident, he produced Neil Young's stellar and sonically charged Le Noise (Reprise, 20101), wrote his memoirs, Soul Mining (Faber and Faber, 2010), he made his own music with a new band, Black Dub. The devotion and passion he invests in everything he does make him jump over every fence and obstacle to achieve magic.

Black Dub's music tumbles down, and spills out of the speakers in the form of unpolished and unrefined music that blurs the boundaries of folk, rock, dub reggae, blues and funk into a beautiful blend. The band is actually Lanois' old recording/touring unit—bassist Daryl Johnson and drummer Brian Blade—coupled with newcomer/lead singer Trixie Whitley. Lanois—who wrote all but one track (the group composition, "The Last Time"—is largely in the background, guiding the band and singing backing vocals, with the exception of two tracks, where he's upfront.

As on Lanois' previous records, nothing sounds rushed and everything progresses at its own, gradual pace. Black Dub kicks off with "Love Lives," a track that is both deeply emotional and inviting, a well-constructed, mid-tempo folkloric pop tune with reggae shadings, good singing and reflective lyrics. "I Believe in You" is done in a crossover reggae manner, with playful rhythms that give it a truly distinct flavor. "The Last Time" welcomes Blade's father, Brady Blade, Sr., on lead vocals. The Black Dub treatment of this impassioned and upbeat gospel tune—from the 2008 movie Here Is What Is, and heard on the accompanying soundtrack (Red Floor Record, 2008)—makes it almost unrecognizable, while still beautiful.