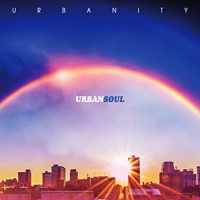 Urbanity, an Australian duo comprising keyboardist Phil Turcio and guitarist Albare (Albert Dadon) started collaborating 27 years ago and Urban Soul follows hot on the heels of Turcio's Signals and Albare's Dreamtime. It's a fairly undemanding set but undemanding doesn't automatically equate to unattractive. Indeed the album clearly demonstrates what can be produced by just two musicians to create a full and effective band sound. George Benson has been producing fine albums of this ilk since his transfer to Warner, with the release of albums like Breezin', and also The Rippingtons, under the leadership of Russ Freeman, have produced twenty albums in a similar vein.

"The Mind Reader" is a laid-back bluesy outing with luxuriant guitar and a catchy vamp. Albare is a good guitarist, playing with dexterity imbued with emotion, as heard on "Mystical." The title track, "You're In My Dreams" and "Something Sweet" are all balladic numbers, very much in the Benson mold with perhaps some slight undercurrents of Curtis Mayfield soft funk.

Things take a livelier turn with the two part "The Holyman." The melody is also more labyrinthine here and all the more satisfying for that. By contrast "Deep" is out and out funk replete with handclaps and a bouncy bass line and this tack is continued on "Don't Look Back."

There's a faithful interpretation of the Jagger and Richards hit "Angie" from the Stones' 1973 release Goats Head Soup. Oddities include the two-part "The Eye of the Storm," on which Albare is heard on electric sitar, a very rare outing for such an instrument in any genre.

Taken for what this is, an album of perfectly executed numbers in a smooth jazz idiom, it successfully achieves what it sets out to do and might well mark the beginning of a wider audience for this deceptively expansive-sounding two man outfit.