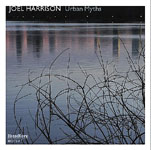 With a string of outstanding records that began with his personal look at the music of George Harrison on Harrison on Harrison (HighNote, 2005), continued with an all-original pairing with guitarist Nguyen Le on Harbor (HighNote, 2007) and culminated with the ambitious The Wheel (Innova, 2008), guitarist Joel Harrison has, over the last few years, been setting an increasingly high bar both compositionally and as a player.

Most remarkable is that he's managed, each time, to reach that bar and, in many cases, surpass it. Urban Myths may be an homage of sorts, but it still possesses his personal imprint, avoiding the retro feel of so many others of its kind. Instead, this largely original tribute to electric music of the mid-to-late '70s from legends including Joe Zawinul, Herbie Hancock, Wayne Shorter and John McLaughlin is as modern as they come, while still unmistakably referencing the music that Harrison grew up with back in the day.

Urban Myths has grooves aplenty, but they're couched in the kind of episodic writing that's been an increasing Harrison trademark, turning what is largely an impressive blowing session for friends including altoist David Binney and über-violinist Christian Howes into a series of intriguing compositions that transcend mere heads or vamp-based jams. What traces of Harrison's influences exist are so subsumed in his expansive approach to writing that they're more elemental than direct. Not unlike Binney, Harrison finds new ways to couch his roots in complex structures, as on the fiery "You Must Go Through a Winter," where Howes' fervent solo is supported by the relentless energy of bassist Stephan Crump and drummer Jordan Person.

The groove gets darker and greasier on "125 and Lenox," with a staggered melody that concurrently references Shorter and, during Daniel Kelly's Rhodes solo, Headhunters-era Hancock—though the rhythm section's open-ended approach is like nothing either artist did in the day. "Mood Rodeo" finds an odd nexus between mid-'70s Miles Davis and Jean-Luc Ponty's irregular metered fusion—again, despite sounding like neither of these players, with writing of far greater compositional weight. "Last Waltz for Queva" may be a countrified ballad, but its innate lyricism goes beyond western roots with a melody that's sophisticated yet simple; a tad oblique, but equally memorable and singing.

Harrison delivers some of his best solos to date. His blues-drenched Telecaster on "Last Waltz" navigates its gospel-inflections with deep feeling, while his massively overdriven solo on "125 and Lenox" is the definition of reckless abandon; a visceral foil for solos throughout from Binney and Howes that match Harrison's unbridled passion and clear invention.

Urban Myths may appear, on the surface, less challenging than Harbor or The Wheel, but Harrison nevertheless manages to create a more contemporary tribute to decade-old music more often aimed at lengthy soloing. Skewed as only Harrison can, Urban Myths is an homage with a difference, and continues to assert his growing reputation as a writer and performer of great significance.

You Must Go Through a Winter; 125 and Lenox; Mood Rodeo; Last Waltz for Queva; Straight No Chaser (variations); Between the Traveler and the Setting Sun; Urban Myths; High Expectation Low Return.