By JOHN SHARPE
September 29, 2016
Sign in to view read count 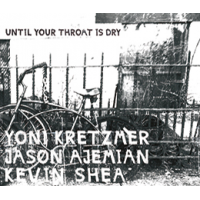 Israeli-born, NYC-based tenor saxophonist Yoni Kretzmer convenes a co-operative trio on Until Your Throat Is Dry, released on his own OutNow imprint. Completing the line up are drummer Kevin Shea, best known for his role in the stylistically promiscuous Mostly Other People Do the Killing and the anarchic Talibam!, and bassist Jason Ajemian, from Rob Mazurek's Exploding Star Orchestra and Chicago Underground Trio. Across four collective constructs their modus operandi touches on both free jazz and free improv, shifting organically between the two ends of that particular spectrum.

All three pursue an uncompromisingly inventive approach. Kretzmer trades in muffled incantations and controlled overblowing integrated into a rollercoaster stream, though a spontaneous tunefulness lies at the core of his insistent lines, most notably on "A Walking Rant." On bass, Ajemian brings a visceral physicality, obvious from the thwacks and slaps of his stuttering pizzicato intro to the same piece. But later he also wields his bow to good effect to blend his fizzing harmonics with Kretzmer's saxophone aerobatics. However his gentle side comes to the fore in "Repeated Routine Exception" during a resonant meditation. Like the bassist, O'Shea imparts thrust without overtly stating a beat, corralling taps and rattles into intermittent propulsion.

There's a fluidity to the exchanges such that at times Kretzmer's skittering saxophone recedes in the sonic picture to allow the rhythm spasms to carry the narrative, while elsewhere he's upfront and personal. Such changes in dynamics stem from across the band, whether the catalyst be Ajemian's increasingly urgent sawing, a ramping up of the anguish in Kretzmer's tenor inflections or Shea's faster, louder tom tattoo.

While much of the program is high energy, the intensity ebbs and flows, becoming more conversational in "Plains Lay Ahead" which eventually explodes into skronk, via a bout of extemporized melody, until bowing out at its peak. "Torn Throughout" presents initially as the most extreme number, building from everything-but-the-kitchen-sink clatter via smoldering tenor and churning bass and drums, but even here the closing section traffics in hoarse breaths, arco squeals and muted strikes, with Kretzmer adding vocal overtones in the manner of Joe McPhee, to create an attractive finale.