By GLENN ASTARITA
July 8, 2015
Sign in to view read count 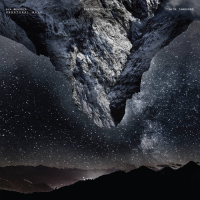 I listened to the LP, and it appears that the only other option would be to purchase the digital download. But the wide dynamic range of vinyl serves this band well. The musicians' kinetic energy frames a multi-genre rite of passage as the trio centers its modality on avant prog-rock, knotty jazz rock, experimental improv and grunge. No doubt this is an excitable unit, led by Menzova's multi-purposed, hard-edged attack containing hearty doses of blistering chordal developments, stinging leads and unconventional voicings. Her vocals are placed evenly in the mix and largely overshadowed by the booming polyrhythmic expositions, although the lyrics are provided on the insert sleeve for those who wish to follow along.

Indeed, there's a whole lot of shakin' and brain- rattling going on. On pieces such as "Dogsbodies" and "Quit Your Unnatural Ways," you'll be treated to a bevy of fireworks, initiated by Mendoza's garrulous distortion-based phrasings, fervent strumming and coy use of harmonics, shaded by keyboardist Dominique Leone's occasional use of electronics effects.

Even though the musicians blow the walls down, their solid musicianship and perky gait equates to a scenario where they don't solely rely on eternal soloing escapades or overly cerebral metrics. They impart a capricious stance, but it's the proverbial balls to the walls approach, supplemented by an hyper- mode take no prisoners group chemistry that infests each track.

Shapeshifters; That Furious Harpy’s Still Following Us; Dogsbodies; Feral Twin; Is This A Joke; Quit Your Unnatural Ways; They’ll Get You In Their Dreams Irene.