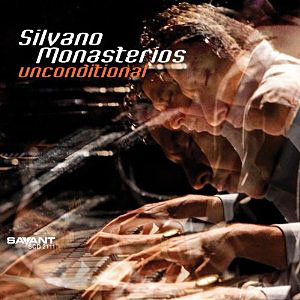 The word "unconditional" is often associated with love, referencing the feeling that parents have for their children and pets have for their owners, but the word itself isn't limited to use on this topic. In fact, the very meaning of "unconditional" actually addresses a lack of limitations or constraints, as does the music on pianist Silvano Monasterios' Unconditional. This recording marks Monasterios' Savant Records debut, and the Venezuelan-born, Miami-based pianist breaks free from the shackles of Latin jazz labeling and looks past his local scene to create a rich program of original music that touches on a variety of styles and moods, ranging from serene to searing.

The rapport that Monasterios has developed with his Fourth World Ensemble, during their three years together prior to this recording, is evident from the get-go, as the music possesses a sense of comfort, regardless of the tempo. While most pieces usually hone in on saxophonist Troy Roberts and Monasterios, this is a full band affair. Bassist Jon Dadurka supports the music brilliantly, underscoring funky fare with frisky bass riffs ("Monsieur Petit Noir") and providing gentle arco work in meditative surroundings ("A Song For Jacques Part I"), while drummer Rodolfo Zuñiga emphasizes every rhythmic twist and turn in Monasterios' music with his detailed playing. Bassist Gabriel Vivas, stepping in on two numbers, lays the foundation on the lone cover—the Bill Evans-associated "Sno' Peas," written by Phil Markowitz—and helps the band move through a sea of tranquility on the title track. Percussionist José Gregorio Hernàndez is the final piece to the puzzle and, while he adds heat to the music with some hand drumming ("Monsieur Petit Noir"), his subtler contributions are of greater value. His stunning shaker work, which adds another dimension and layer of rhythmic complexity to the music whenever it surfaces, is the perfect example of a small sound making a big difference.

While the music occasionally touches on Latin jazz expectations, as demonstrated with the Samba-fied backing behind Monasterios' solo on "Farmacia Del Angel," these songs don't always point South. That's just one part of this multifaceted presentation. Slick, urban fare with '70s fusion sheen ("Black Saint") and peaceful melodies of an acoustic nature ("Unconditional") arrive elsewhere and, while they might seem like strange bedfellows, they work just fine as they lie next to one another. Swing even manages to surface with "Forgotten Gods," which features some frenetic saxophone work from Roberts and tasty drum breaks from Zuñiga; calling this one up-tempo would be an understatement.

Whether delving into different traditions or moving beyond them, Monasterios demonstrates an unconditional love for this music, the compositional process and the band that takes this rewarding journey with him.