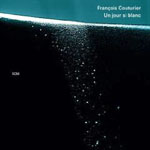 For forty years, ECM has created a fertile landscape for the solo piano recital. The list of illustrious pianists who have contributed to this pantheon is as stylistically broad as it is internationally inclusive. Paul Bley, Chick Corea, Keith Jarrett, Marilyn Crispell, Jon Balke, Misha Alperin, Vassilis Tsabropoulos—all these pianists have placed their individual stamps on a style of solo improvisation that, with Manfred Eicher's attention to transparency and clarity, have become touchstones to which other labels and artists aspire. Add to that list French pianist François Courturier, whose Nostalghia—Song for Tarkovsky (ECM, 2006) was a suitably cinematic homage to the late Russian film director Andrei Tarkovsky (1932-1986).

Whether wholly improvised or based on predefined form, Couturier's touch and nuanced expressiveness brings freshness to even the most familiar. "Lune de miel" may be loosely based on "I Fall in Love Too Easily," but Couturier's all-inclusive language expands beyond even the broadest jazz vernacular, creating a free-flowing melting pot of ideas. Stream of consciousness means different things to different people; to Couturier it clearly means extrapolating an idea to its furthest reaches, all the while keeping its origin in its crosshairs.

"L'intemporal" is suitably majestic; yet this homage to Bach—with the reverent sound of Lugano, Italy's Auditorio Radio Svizzera a significant sonic partner—feels both of its time and out of time. The sequencing of these 17 miniatures creates its own arc over the course of an hour, picking up energy on the fierier, chord-layered "Les soleil rouge" and even more fervent "Der Blaue Reiter," only to create a melancholy sense of release on "Sensation."

With its unmistakable European classicism largely trumping American jazz-centricity, Un jour si blanc is more closely aligned with ECM's solo piano recordings like Alperin's At Home (2001) and Tsabropoulos' Akroasis (2003) than it is Bley's Open, To Love (1973) or Jarrett's Köln Concert (1975). But as part of a larger discographical oeuvre, Couturier's sublime Un jour si blanc not only expands the label's remarkable devotion to the piano's infinite potential, but whets anticipation for the conclusion to his captivating trilogy.