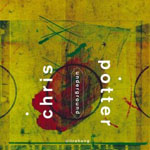 With a consistent line-up since the debut of Underground (Sunnyside, 2006)—where, after alternating between guitarists Wayne Krantz and Adam Rogers, the reed man settled on Rogers as the group's full-timer for Follow the Red Line: Live at the Village Vanguard (Sunnyside, 2007)—Chris Potter has not only created his most personal and identifiable music to date, but he's clearly also found the group with which to make it. Potter and Rogers, along with mainstays Craig Taborn (Fender Rhodes) and Nate Smith (drums), work at many levels, and Ultrahang continues to mine similar territory while demonstrating steady growth.

Potter's penchant for shifting meters—despite being couched in curiously grounded visceral grooves less firmly entrenched in a conventional rhythm section's more fixed pulse—remains intact on the down-and-dirty opening title track, though he goes for four-on-the floor with the fierier "Rumples," where the saxophonist and Rogers deliver a knotty, mind-bending theme of near-light speed velocity. Taborn holds down the bottom end—not only by contributing gritty bass lines, but with a disposition towards chordal accompaniment in the instrument's lower register. Smith is the group's unshakable yet empathic anchor—tightly locked in with Taborn while keeping his ears open to the rest of his band mates.

Potter's ascendance as one of his generation's most important saxophonists may be more the result of his outstanding work with trumpeter Dave Douglas and Dave Holland—especially the remarkable chemistry he shares with the bassist's longtime trombonist Robin Eubanks—but he deserves equal, if not more, accolades for his own work. He's one of the few saxophonists alive today who can build lengthy solos that avoid repetition and excess, the one clearly best-suited to carry on Michael Brecker's legacy. Like the late saxophonist, Potter is uncannily versatile—near-chameleonic, in fact—capable of fitting into virtually any context and bringing a focused intent that can be, in turns, frighteningly powerful and painfully lyrical, as he is, respectively, on the intense "Small Wonder" and a tender rework of Bob Dylan's "It Ain't Me Babe."

Taborn's career has been defined by breadth and a nearly unparalleled encyclopedic knowledge that, like Potter and Rogers, makes him a perfect fit regardless of context. Soloing with relative economy on a gentle arrangement of Joni Mitchell's balladic "Ladies of the Canyon"—available as a digital bonus track but not on the CD—he morphs easily into the Orient-facing and episodically detailed "Facing East." Rogers demonstrates equal versatility,despite his own albums, including Apparitions (Criss Cross, 2005) and Time and the Infinite (Criss Cross, 2007), leaning more towards modern mainstream. Here he demonstrates his full breadth, ranging from sharp-toned and obliquely effected punctuations beneath Potter's solo on the title track to an equally abstruse but edgy solo on the high octane "Boots" and softer side on "Ladies of the Canyon."

With a group this versatile, there's little Underground can't do. Still, it speaks with a clear voice that incorporates elements of M-Base mathematics, funk, fusion, and folkloric pop references into a unique mélange that, based on the trajectory of Underground, Follow the Red Line and, now, Ultrahang, has nowhere to continue but up.