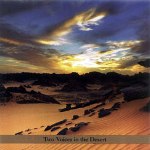 Pianist Burton Greene and clarinetist Perry Robinson have been close friends for a very long time. During those years, they have bonded with a common musical purpose that stems from free expression to the gentle molding of a life perspective. Working together in Greene's groups—Klezmokem and Klez-Edge—the pair has become identifiable with an open and unfettered sound, imbued with Eastern European origins. Outside of these larger groups, Greene and Robinson come together to present a unique and lively duo conversation in Two Voices In the Desert.

The record's centerpiece is "The Desert Suite," containing two movements: one, a collaboration between Sylke Rollig and Greene; the other by John Zorn. "Desert Wanderers" and "Eitan," Greene identifies as having similar intentions musically, both conjuring up imaginations of the physical and atmospheric aspects of a desert that are ominous as well as beautiful with respect to experience rather than mere description. The suite gives a core to the recording, a nexus where the musical lines unfold in unisons and the phrase juxtapositions resemble tonal narratives. With an ever-changing yet consistent dynamic manifested on the keyboard or on the strings of the sounding board, the piano gives the clarinet or ocarina a surface on which to stand. The two players maintain a dominant legato texture that sparkles with light. The instruments go in separate directions, echo each other or are in unison. Conclusively, in the mind's ear, the idea of a desert becomes attractive and offers a finality of peace.

Surrounding "The Desert Suite" are songs that elicit humor (Robinson's "Ella Turtella"), bittersweet sorrow ("A Lamentation") and joy ("Syl's" and "Burty's Freylekhs"). Many bear the feminine imprint of Greene's colleague, Syl Rollig ("Syl's Freylekhs," "A Lamentation," "Song for My Friend Burton," "Der Kats Zogt A Miowke"). The evocation of Eastern European culture is constant, especially when dance motifs are used ("Syl's Freylekhs," "Burty's Freylekhs"), but, more importantly, simply as a result of the interdependent combination of piano and clarinet.

Greene and Robinson are precisionists, with no question as to how they will interact with each other, regardless of the fact that the piano is grounded (though often playfully so) and the clarinet—and other high-pitched horns that Robinson uses—seems to stay at the opposite end of the sound spectrum. Perhaps the intuitive unification of the piano baseline and the innocent flightiness of the clarinet contribute to the freedom of expression that the pair has adopted, allowing Greene to get away with vocally meowing, ringing bells and clattering a set of false teeth in "Der Kats Zogt A Miowke," and Robinson can compose a piece based on serenading his pet turtle in "Ella Turtella."

The inherent message that Two Voices In the Desert conveys harks back to something Greene said in a 2001 filmed interview, where none of the dozen or so musicians interviewed ever raised the question that he did, to define inspirations for sound-making. Greene's question: "And what about nature?" Spoken like a true tzadik.

Visit Burton Greene and Perry Robinson on the web.