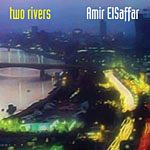 A child of the Chicago suburbs, ElSaffar's interest in traditional Iraqi music is fairly recent. A former sideman to pianists Cecil Taylor and Vijay Iyer, ElSaffar made multiple trips to Iraq in 2002 to study the music of his ancestral homeland. Smitten by the Iraqi classical vocal tradition of the maqam, ElSaffar studied extensively with the masters of the form, arriving back in the States just before the start of the 2003 invasion.

Maqam uses microtones similar to those found in blues music as the basis for its dense heterophony. Enriching the ensemble's unison passages, this polyphonic approach yields a vibrant textural mix as horns and strings weave a labyrinthine web of sound through numerous collective improvisations.

Rhythmically, maqam and jazz share a predilection for complex, unusual meters. "Menba'" is played in the traditional jourjina meter of 10/8, "Khosh Reng" uses a 17/8 rhythm from Syria and "Blood And Ink" blends the 10/8 jourjina pattern with a 12/8 march.

Together, the sextet unveils a rich mosaic of sound, with kaleidoscopic strings splayed across scintillating waves of percussion and driving bass ostinatos. ElSaffar dovetails with Mahanthappa's highly vocalized alto with microtonal detail, creating sumptuous polytonal voicings. Passionate and emotionally resonant, they bring a bluesy fire to the yearning modalities of ElSaffar's Arabic melodies.

A gorgeous record balanced between two worlds, Two Rivers is a stirring example of the creative possibilities of international jazz in the 21st century.