BY IAN PATTERSON
December 30, 2016
Sign in to view read count 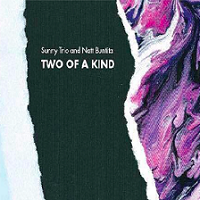 The merging of jazz and Asian folk idioms is gradually becoming more common, though most typically in Indonesia and South Korea. Thailand's rich folkloric tradition has been overlooked by Thai jazz musicians, who tend to favour American jazz standards. Until now, that is. Two of a Kind sees pianist Sunny Rattana and singer Natt Buntita visit traditional Thai folk songs/poems through a jazz prism, ably supported by bassist Tae Siriwat and drummer Hong Chanutr Tetchatananna—all jazz instructors at Bangkok's Silpakorn University. Original compositions inspired by Thai traditions and a couple of jazz standards round out this mixed bag of a 2-CD set.

Dissonance and angularity has little place in Thai popular music and here the melodious traits of the South East Asian country's popular songs infuse Buntita's delivery on the brushes-driven ballads "Chun Ja Fun Teung Te," complete with layered strings, courtesy of violinist Volt Witchuporn, and "Nokkamin." The lovely "Krai Nor" features pockets of swing and pianist virtuosity; Siriwat and Hong are empathetic rhythmic partners, though the drummer is rarely called upon to display the full range of his vocabulary, so vividly expressed in the Asian Jazz All-Stars Power Quartet.

The slow grooves and graceful vocal of "Loy Krathong," which conjures the beautiful full-moon Thai ritual of floating a candle-lit, flower-laden basket of banana leaves along a river, buoy an extended solo from Rattana, lyrical, flowing and blues laced. Bangkok alto saxophone legend Koh Mr. Saxman enlivens the swinging "Mong Arai" over fast-walking bass, bustling drums and jagged piano chords, with Rattana responding with his most animated, propulsive playing of the set. Bowed bass, Thai vocal and delicate piano combine on the atmospheric "The Poem of Thai Foods and desserts by King Rama II."

There's plenty to admire in Rattana and Buntita's lyrical exploration of the nexus between jazz and Thai folk. It's an impressive debut on multiple levels and an augury of greater adventures to come. It feels as though they've discovered the seam. Deeper excavations, hopefully, lie ahead.