BY GLENN ASTARITA
December 30, 2016
Sign in to view read count 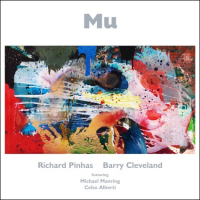 French guitarist and electronics ace Richard Pinhas set high standards for electronic rock with the advent of Heldon back in 1974. But his voluminous discography as a solo artist and collaborator surges onward with two concurrent 2016 releases for Cuneiform Records: Process and Reality with drummer Tatsuya Yoshida and noise electronics whiz Masami Akita aka Merzbow, and this quartet date Mu, co-led with guitarist, technologist, Barry Cleveland.

The frontline reaps the benefits of having bass legend Michael Manring laying out a thumping and pumping bottom end via his slinky and fluid notes, complemented by drummer Celso Alberti's multi-purposed attack. Similes of a scenic tour into a Black Hole star with grooving pulses come to mind. Hence, the guitarists' streaming and phase shifting notes and the rhythm section's undulating cadences along with melodic overtones and ghostly apparitions are other sensations that prevail throughout the production.

Think of space rock with a college education as the band paints a dexterous, intertwining sonic-scape from start to finish. On "I Wish I Could Talk in Technicolor," Cleveland and Pinhas' penetrating sustain driven leads stretch out through the cosmos as Alberti picks up the pace atop Manring's elongated notes. Moreover, swishing guitars and intense EFX treatments give way to some electro jazz improv during the bridge, where the bassist and drummer go to battle, which to some extent continues during "Zen/Unzen," as the band steadily raises the pitch and broadens the playing field. The album's finale is "Parting Waves," and is constructed like an epilogue that flourishes amid a low mix of what sounds like an elderly man talking in the background, perhaps implicating that the interstellar space flight has achieved its mission or whatever imagery your mind's eye may disclose. (Recommended...)

Forgotten Man; I Wish I Could Talk in Technicolor; Zen/Unzen; Parting Waves.