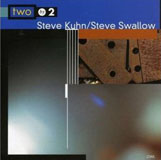 Few musicians possess anything like the lyrical capacity of Steve Kuhn and Steve Swallow, whether as composers or performers and this album of duets recorded in 1995 achieves an ideal of empathy. With the compositions roughly divided between the two, there's as much emphasis on the construction of durable melodic material as spontaneous interaction.

Kuhn's opening "Gentle Thoughts" immediately achieves a limpid beauty, a vaguely Oriental theme that suggests light shimmering on water, while his "Two by Two" manages to reanimate traditional blues lines with sheer good spirits and just the lightest touch of ironic bluster. A triptych of Swallow compositions follows, with Kuhn buoyantly exuberant on "Remember," before the composer supplies the most guitar-like of electric bass solos, providing a slightly dissonant counterfoil to Kuhn's ebullience. Some of the best bop composers—Tadd Dameron, Herbie Nichols—seem to underpin "Wrong Together," a somber theme with a sprightly undercurrent that testifies to Swallow's ability to construct compound moods with subtle harmonic suggestion. There's more of the same in his familiar "Eiderdown," a fine performance of a genuinely memorable tune.

Kuhn's "Lullaby" returns the two to the quiescent grace of the opening with Swallow achieving a glassy, resonant sound. There's a kind of Latin melodrama to Swallow's "Ladies in Mercedes," Kuhn's bright, soaring lines and Swallow's resilient underpinnings summarizing the duo's strength—an ability to develop complex harmonic dialogue with grace and wit. Latin elements are even more pronounced in Kuhn's passionate "Deep Tango" and the brisk frolic of his "Mr. Calypso Kuhn." Kuhn's spoken-word performance of his "Poem for #15" recalls Swallow's deft settings of poems by Robert Creeley and focuses the recording's emotional intensity, suggesting how often this is music about something. In all, it's a superior performance by two masters of micro-ensemble intimacy.