Andrew Sterman: The Path To Peace 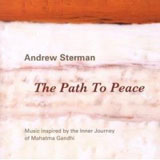 Set against a sparse percussive backdrop, long bluesy notes come from saxophonist Andrew Sterman's tenor and harmonize with Todd Reynolds' emotive violin for the "Opening" of The Path To Peace. For this concept album that presents original music motivated by Mahatma Gandhi's spiritual path, Sterman has taken on the difficult task of musically representing not only a philosophy but the developmental steps that bring one to internal "Peace." The outcome is a triumph that translates the feel of Gandhi's approach into song and in the process makes a wonderfully cohesive musical statement.

The soundtrack to a multimedia experience that includes dance choreographed by Sridhar Shanmugam and video of Gandhi's life, The Path to Peace is noteworthy for the elegant harmony that these musicians achieve. Traditional Japanese percussionist Satoshi Takeishi is a singular jazz artist whose presence on any project adds a wonderful coloration to the sound. Here, he is superb as his perfect touch decorates each piece and beautifully melds with the deeply rich sound of guitarist Bill Frisell alum, bassist Kermit Driscoll.

Interspersed between the stately sound of "Truth," the naiveté of "Faith," the unity of "Fearlessness," the simplistic beauty of "Ahimsa (avoidance of violence)" and the power of Ghandi's core concept of "Satyagraha (love-force)" are traditional chants from the Bhagvat Gita performed by master N.M. Sundar, Takeishi and Sterman on bass flute. Pianist Mick Rossi, guitarist Bob Palmieri and veena (Indian lute) player Nivedita Shivraj blend exceedingly well for a gestalt that is fluid and graceful. Sterman's tone has never sounded richer nor harmonized any better than it does with Reynolds' violin. A major conceptual work whose exquisite ebb and flow recaptures a blueprint for peace and harmony that merits listening to by a worldwide audience.