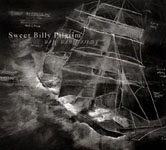 In the 21st century nothing is sacred, but in the best possible way. Cultural, stylistic and sonic cross-pollination is today's de facto standard, with sound processing, sampling and post-production creating previously unheard aural landscapes. Sweet Billy Pilgrim—largely the brainchild and creation of lead singer/songwriter/multi- instrumentalist Tim Elsenburg, but unmistakably colored by band mates, banjoist Anthony Bishop and drummer Alistair Hamer—explored the vaster landscapes of folktronica on its widely praised debut, the enigmatically titled We just did what happened and no one came (Wonderland, 2005). Following a festival performance highlight and equally captivating live remix of Huntsville's show at Punkt 07, the British group has upped the ante with Twice Born Men, creating folk music for the new millennium where Elsenburg's broader interest in traditional folk music (English and otherwise), ambient music, indie rock and even a touch of progressive rock can also be found.

The group is defined by an unassuming honesty. Twice Born Men's eight Elsenburg tunes—even when occasionally approaching an aggressive stance as on the gradually densifying "Kalypso," largely driven by intertwining kalimba-like arpeggios—wraps everything in a sublime cushion of sound that feels both fresh and familiar. The time spent creating sonic layers of, perhaps, little individual sense but which collectively create a relentlessly beautiful landscape suggests Elsenburg's ability to see a grander picture for even the simplest of songs. "Future Perfect Tense," with it's irregularly metered opening and prog-like analog synth textures, leads into a banjo-driven core, featuring Elsenburg's evocative but never over-the-top singing; an undeniable folk song that gradually leads into a harmonized chorus with rich washes of sound and an intensifying coda for rich electric guitar and propulsive, reverse-attack percussion.

Sweet Billy Pilgrim's affiliation with post-rock experimental crooner David Sylvian dates back a few years, with Elsenburg's guest appearance on Nine Horses' Snow Borne Sorrow (Samadhi Sound, 2005). With the participation of Norwegian trumpeter Arve Henriksen and a credit to Punkt Artistic Co-Director Jan Bang, it's likely that Nine Horses was the meeting point that resulted in Sweet Billy Pilgrim's recruitment for Punkt 07 and an experience that opened the group's sound up to near-infinite possibilities. Still, Elsenburg's approach to both songwriting and album-making remains focused on the essence of song, simple beauty in words and music, and a near-cinematic narrative approach that gives both We just did and Twice Born Men compelling arcs—exploring revealing matters of the heart and soul with a stark morality that bears broad resonance.

Elsenburg and Sweet Billy Pilgrim may have a sound that's long on directness and short on pretense, but the group's instrumental, songwriting and post-production aptitude make Twice Born Men compellingly unpredictable, with no end to the wealth of new ideas revealed on each and every listen. If Sylvian's label provides the group the push it needs to get into a larger spotlight, all the better. Meanwhile, irrespective of commercial concerns, the unparalleled Twice Born Men will be hard to beat for best singer/songwriter album of 2009.