The David Sylvian that fronted new wave pop band Japan wore luminescent hair and glam make-up; on the cover of his solo debut, 1984's Brilliant Trees, he was stylish and refined, a gentleman popster. But the illustration that introduces 2003's Blemish sends a different message: he's bedraggled and unshaven, his far-off expression turned haunted. The new millennium has seen a more serious Sylvian, several steps further along on his musical journey and seeking new sounds to explain new traumas. While Japan started off as one of many '70s New Romantic bands, they made an unpredictable break with their hit "Ghosts" - a searching and evocative single where spare rhythms and fleeting electronic sounds lay under Sylvian's smouldering tenor

Label: SamadhiSound
Released: 2014
Track listing: There's a light that enters houses with no other house in sight [64 mins 20 secs]

David Sylvian's extended flight from pop stardom in the middle years of the 1980s was an enthralling counterpoint to that decade's facile obsession with surface and relapse into materialism. While mainstream pop retreated from the innovations and musical openness of post-punk into the empty banalities of bean counting corporate rock, Sylvian among a few others appeared ... 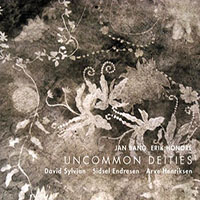 Jan Bang / Erik Honoré Uncommon Deities SamadhiSound 2012 As the 2012 Punkt Festival debuts its eighth annual edition at its home base of Kristiansand, Norway--but this time, in the brand new, state of the art Kilden Performing Arts Centre--it has gradually evolved into something more than just a festival. The ...

Died In The Wool - Manafon Variations

Label: SamadhiSound
Released: 2011
Track listing: CD1: Small Metal Gods; Died in the Wool; I Should Not Dare (for N.O.); Random Acts of Senseless Violence; A Certain Slant of Light (for M.K.); Anomaly at Taw Head; Snow White in Appalachia; Emily Dickinson; The Greatest Living Englishman (coda); Anomaly at Taw Head (a haunting); Manafon; The Last Days of December. CD2: When We Return You Won't Recognise Us.

….and poppies from Kandahar

Died In The Wool - Manafon Variations

David Sylvian Died In The Wool: Manafon Variations samadhisound 2011 As the world becomes a smaller place, so, paradoxically, do musical communities expand to reach around it. British singer/composer David Sylvian--first of 1980s pop group Japan, but then a solo artist taking increasing chances with each successive album--has been busting ...