Alphonso Sanders and Bill "Howl'n Madd" Perry: Twice as Nice Down in Mississippi

By WOODROW WILKINS
August 24, 2010
Sign in to view read count 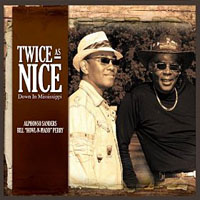 Down-home Delta blues is what can be expected from the duet of Alphonso Sanders and Bill "Howl-N-Madd" Perry. A popular act at clubs and festivals, the pair has released its first recording, Twice as Nice Down in Mississippi.

Sanders has been involved in music education for more than 25 years, and is currently chair of Fine Arts at Mississippi Valley State University, where he is also director of the B.B. King Recording Studio. A versatile musician who plays blues, jazz, rock, country and gospel, he's been known to show up at venues with one or more of his many woodwind/brass instruments, to play along with other artists when he's not the featured act. An instructor at the Delta Blues Museum in Clarksdale, Mississippi, gGuitarist/vocalist Perry has appeared on television and in movies, including 2009's The Way of War, with Cuba Gooding Jr.

Together, Sanders and Perry took second place in the 2010 International Blues Challenge in the solo/duo competition. Collectively, they've shared the stage or studio with numerous regional and internationally known artists, including David "Honeyboy" Edwards, Cassandra Wilson, Mulgrew Miller, Kenny Blake and Bobby Rush. For Twice as Nice, the pair is assisted by Jimmy Lee Jr., a musician associated with the B.B. King Recording Studio.

Perry puts on his dancing shoes with "Jook Joint Jumpin.'" His gravelly voice leads, singing, "Juke joints be jumpin,' and the dice be rollin," while Sanders complements on tenor sax and Lee backs things up on tambourine.

Sanders sings lead and plays flugelhorn on "Delta Sun," his voice a smooth, soothing tenor. The song represents the anguish of an underpaid, underappreciated cotton picker: "Lord, even in the midnight, it's ninety-five degrees." After a couple of verses, Sanders switches to flute for the middle solo, with Perry carrying the rhythm.

Sanders leads again on "She's a 3 in 1 Lover," a song which describes the distinct personality types of the woman in his life: "My woman's kind of bossy, my lady's kind of costly, my baby lets me have my way." Perry delivers a sassy guitar solo, and gives a bit of advice to the guys during the fade.

"Willie Mae, I don't need you, girl," Perry sings in "Willie Mae." It's a back porch, juke joint anthem about lost love, as Sanders assists with a spirited tenor solo.

As they do in many of their live performances, Sanders and Perry take turns leading, in addition to writing all but one of the album's ten tracks. Twice as Nice Down in Mississippi comes together well, as a collection of new music with a traditional blues feel.

Title: Twice as Nice Down in Mississippi | Year Released: 2010 | Record Label: Self Produced