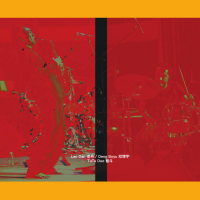 The profile of jazz and improvisation from China rates roughly the same as the chances of keeping global warming below 1.5 degrees Celsius, or an anti-vaxxer's feel for community (if neither of those comparisons sits comfortably, just make up your own)—vanishingly small. So the release of TuTu Duo by reedman Lao Dan and percussionist Deng Boyu, on the Lithuanian NoBusiness imprint, arrives as something of an ear-opener. It presents an idiosyncratic blend of fire music-inclined free playing and folk-inflected melodies as refreshing as it is unexpected.

Lao Dan plays alto saxophone and Chinese flute, having studied the latter to conservatory level before deciding on a more independent path, which has taken him to south east Asia, Japan and a short tour of the USA. His taste for exploration has encompassed progressive rock, thrash metal and noise, sometimes in the company of drummer Boyu, as part of the Red Scarf Trio; but, on this limited edition LP (also available as a download), the pair work in tight lockstep, concentrating on largely unbounded discourse.

A striking trait evident from the off is a shared love of contrasts and clashes. On the opener, "The Prophecy," a gentle pentatonic air, sounded on buzzing flute, sandwiches much more extreme filling; Dan erupts on alto, his clarion wail, like an oriental Peter Brötzmann, eventually morphing into a sustained whistle, while Boyu roils, recalling Milford Graves' earthy resonance. After that initial salvo, their interaction turns more conversational, until Dan begins to alternate his incantatory phrases with a choked squeal. Similarly harsh juxtapositions inform "Waltzing On The Square" where they toggle between the near titular lilt and a tangle of overblown skronk.

Dan's mastery of flute manifests itself particularly on the episodic three-part suite which covers the LP's second side, where he roams between breathy pastel shades, evocative of mist-shrouded mountainscapes, racing rollercoaster sinuosities, and multiphonics which veer expressively between voice and instrument. Boyu adroitly matches the sudden changes of direction, creating dramatic counterpoint which at times suggests the Chinese classical tradition. The final "3rd Movement: Cloud Above My Head, Will You Float Me To Chicago?" offers further testament to their wide-ranging sensibilities, as explosive outbursts ultimately drift into squeaky toy sonorities, such as a quizzical teddy bear, accompanied by a stark heartbeat rhythm.

With such antecedents it seems inevitable that the Chinese scene will become more internationally recognized.

The Prophecy; Tournament Of Chopsticks; Waltzing On The Square; Supranatural Suite: 1st Movement: The Wordless Ocean; 2nd Movement: Grass Against Wind; 3rd Movement: Cloud Above My Head, Will You Float Me To Chicago?