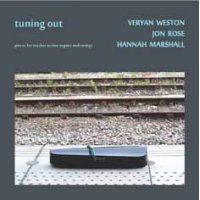 There is a very interesting project awaiting some lucky (and patient) individual, researching the role that churches played in the spread of improvised music in Britain. To clear up any ambiguity, that "churches" refers to the buildings themselves rather than their human members. Any devotee of improvised music in Britain will probably have spent far more time in church than many (so-called) devout Christians, as churches are frequently used to host gigs and also as recording spaces. That has nothing to do with religion but far more to do with the acoustic properties of the buildings and their availability as concert venues or recording spaces for little or no cost.

Those comments were triggered by Tuning Out, a double CD which documents a May 2014 ten-day tour of seven English towns and cities, in each of which the trio of organist Veryan Weston, violinist Jon Rose and cellist Hannah Marshall played in a church; the CD contains performances from five of the seven locations. In this case, as well as the acoustic and economic considerations, the attraction of the churches was the presence in each of a tracker-action organ. In contrast to electric or pneumatic organs, tracker-action organs employ mechanical linkages, manipulated manually by the organist, to control the flow of air to the organ pipes. As Weston says in a sleeve note, "there is a more physical relationship between the instrument and the player. When each stop is very carefully and slowly pulled while a key is pressed, a myriad of uncertain transitional stages of sound is produced..." All of which gives the organist huge scope for creative use of the mechanisms to produce subtle changes by minute pushes or pulls of the stops.

Whatever your prior expectations of church organ, they are unlikely to be fulfilled by the music here, which is far more exploratory and adventurous than most church music. Church organists are renowned for their ability to improvise, but Weston's explorations are a quantum leap away from that. Although the seven church organs used on the tour were selected from a short-list of twenty, each had its own idiosyncrasies and quirks, so each performance was clearly a voyage of discovery for Weston, one which it is a delight to share.

But, given the central role of the organ, the strength of this album is the way that the three instruments come together in a coherent three-way collaboration that is not noticeably dominated by any of them. The tour was publicised as "exploring new territories in micro-tonal tunings using pipe-organs and re-tuned string instruments." Sure enough, the tunings of the cello and violins are different to normal but they work well with one another and with the organs, the three always being complementary if not conventionally harmonious. The proof of this pudding is in the listening—and it works well, handsomely repaying prolonged listening and revealing new facets over time. Yes, Tuning Out is definitely a positive addition to Emanem's already excellent canon of albums featuring improvising strings.