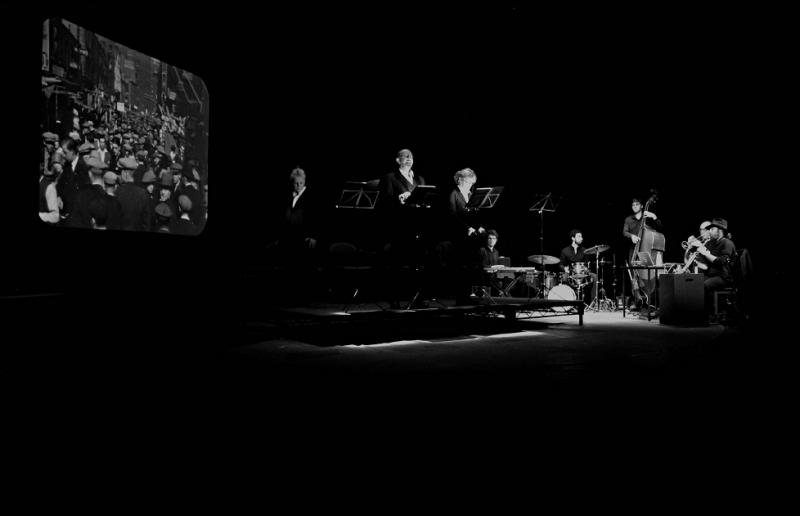 It was hard to know what to expect from the combination of the reading of T.S. Eliot's The Waste Land and the specially commissioned jazz soundscape composed by Nick Roth.

That T.S. Eliot was represented at all in a festival devoted to the work and life of the Nobel Prize winning writer Samuel Beckett seemed odd to begin with.

Yes, the Happy Days Enniskillen International Beckett Festival has always showcased those writers who had influenced Beckett, such as James Joyce and Dante, but there was no formal connection between Eliot—himself a Nobel Prize winner—and Beckett, other than the fact that both were, and remain, giants of modernism.

However, after a visit to the Happy Days Beckett festival in 2014, the T.S. Eliot Foundation was so impressed that it offered generous financial support, patronage that will effectively secure the festival conceived and directed by Sean Doran for the next three years. And given that 2015 marks the fiftieth anniversary of Eliot's death, presenting Eliot's most internationally celebrated work at the Happy Days Beckett festival was an appropriate gesture.

Director Adrian Dunbar decided that jazz would best accompany The Waste Land, given it was published in 1922, during the Roaring Twenties -an era of economic, social and cultural dynamism, when jazz was beginning to spread its wings internationally.

The four actors chosen to recite what is widely considered to be one of the greatest poems of the twentieth century were certainly charged with a hefty responsibility, for surprisingly perhaps, this was the first occasion that the T.S. Eliot estate had granted permission for a complete setting of the text.

Yet with no disrespect to readers Anna Nigh, Orla Charlton, Frank McCusker and Stanley Townsend, the hardest task seemed to fall to Roth. How could a jazz quintet illuminate a poem of such kaleidoscopic vision as The Waste Land?

Eliot's text was inspired by the Arthurian legends of the Holy Grail and The Fisher King, with myriad allusions to, and metaphors derived from, the Tarot, Buddhism, the Hindu Upanishads, Herman Hesse, Tin Pan Alley and Christian philosophy, to cite but a handful of examples. In addition, multiple voices and languages leap—seemingly randomly—through space and time.

In short, any musical interpretation of Eliot's text must surely pose a daunting challenge.

What is more, the Eliot estate stipulated that the music could not play simultaneously with the readings but only in the breaks between the various sections. For Roth, the challenge—in short musical passages—was to simultaneously surmise and anticipate the text, while conjuring radial points of reference to the poem as a whole. Strikingly, in contrast to a poem so incredibly dense—and some might say obscure—Roth's score, whilst never predictable, was refreshingly measured and accessible.

Right from the off, Roth set his own indelible stamp on the performance, with Elliot Galvin's bold, intermittent piano notes chiming forebodingly. The dissonant stirrings of the overture—featuring Simon Roth's crying cymbals and pattering rhythms, underpinned by Tom McCredie's sonorous bass arco—lead into a piano improvisation in the upper registers that was nostalgic in tone. A field recording of rustling leaves related to the unread Latin inscription at the head of the poem, which concerns the myth of Sibyl at Cumae, the prophetess of Apollo who would divine by throwing oak leaves in the air.

Roth's score not only responded to the text's literary references but to the musical ones too. For "Burial of the Dead" the quintet's ragtime groove—with Alex Bonney's muted cornet to the fore—was a direct response to the line "O O O O that Shakespeherian Rag—It's so elegant, so intelligent"—a lyric from a popular Tin Pan Alley song of the day by Dave Stamper/Gene Buck.

However, when a large-screen projection of color film of London in the 1920s intervened—a period when hat-wearing was clearly compulsory, and when the quintet's ragtime would have seemed the perfect soundtrack—the music instead moved sharply sideways into more contemporary terrain—a wholly unexpected shift, perhaps reflecting Eliot's modernism in his day.

Bluesy, New Orleans flavors followed on from "A Game of Chess," with cornet and Roth's saxophone dovetailing nicely, before fading on ambient waves. After "The Fire Sermon," vibrant piano and interlocking horns danced like lapping flames, leading into a passage of prescribed chaos.

The final two passages, "Death by Water" and "What the Thunder Said" were punctuated by short musical interludes: rumbling bass and cymbals evoked "the thunder of spring over distant mountains"; crying cymbals and echoing trumpet conjured the "tolling reminiscent bells, that kept the hours and voices singing out of empty cisterns and exhausted wells."

Forty five minutes after it began, Eliot's endlessly imaginative poem ended with the Hindu prayer for peace: "Shanti, shanti, shanti." The seal, however, was set by Roth, with ambient drone-cum white noise drawing a line under a unique event.