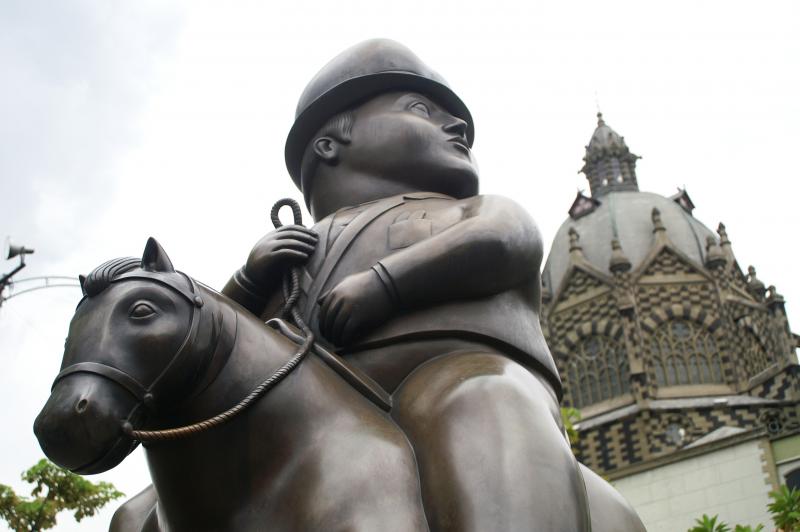 A series of overlapping festivals in five cities that run from mid-September into early October offers visitors an excellent opportunity to experience truly world class music in a variety of exotic settings.

As the season of summer jazz festivals in the U.S. winds down to a precious few, including California's iconic, mid-September Monterey Jazz Festival, the eyes and ears of seasoned aficionados may be focused on options in other lands. Don't be surprised if an increasing number of North American fans will find much to their liking in the South American nation of Colombia, a mere three or four hour flight south from many major U.S. cities. Late September and October finds a handful of Colombian destinations alive with multi-day festivals that feature a bounty of largely unknown but innovative national talent and a tempting variety of international jazz stars.

This nation of mega-metro areas is, after Brazil and Mexico, Latin America's third most populous country, with a population rapidly approaching 50 million. The only South American nation to boast both Pacific and Atlantic (Caribbean) coastlines, Colombia is home to a diverse multicultural melting pot that is noted for its vibrant music traditions and increasingly robust jazz scene.

Yes, the headlines are frequently less than flattering. Stories of large scale drug busts and occasional flare-ups of violence involving the FARC (Fuerzas Armadas Revolucionarias de Colombia), an anti-government guerrilla movement that has fomented clashes with the country's security forces for over four decades, occasionally grab our attention. But changes for the better are everywhere to be seen. The economy is booming, the middle class is expanding, peace talks with the rebels are prodding slowly along, and Colombian culture is increasingly being celebrated in a number of positive ways. The U.S. dollar is strong, making an adventure there very affordable for visitors from abroad. New hotels, being built by national and international hospitality chains, are sprouting up everywhere. Delta Airlines, the major U.S. carrier that serves the country, will soon expand its service to include the colonial city of Cartagena and Medellín, Colombia's second largest city. That's all tangible evidence of the positive things that are happening on the ground in this increasingly welcoming country.

When it comes to presenting jazz in its many variants, Colombia is also making giant strides. A series of overlapping festivals in five cities that run from mid-September into early October offers visitors an excellent opportunity to experience truly world class music in a variety of exotic settings.

Colombia welcomed jazz to its shores in the 1920s and since has produced a raft of certified improvisers of international stature, including saxophonist Justo Almario, harpist Edmar Castaneda, pianist and arranger Edy Martinez & His Jazz Orchestra, percussionists Memo Acevedo and Samuel Torres, and pianist Hector Martignon, among many others. Jazz, like coffee, flowers and rum, is becoming a growth industry.

Colombia's Circuito de Jazz (The Jazz Circuit) is a loose affiliation of locally produced festivals in Bogotá, Cali, Barranquilla, Medellín and Pasto. Thanks to careful coordination, major jazz artists from the U.S., Europe and South America are booked to facilitate appearances in multiple locales, complementing the presence of a growing and impressive array of national groups.

This year, the certified headliner is Panama's renowned pianist Danilo Pérez, who makes his debut appearance at Colombian festivals years after such keyboard stars as the Dominican Republic's Michel Camilo, Cuba's Gonzalo Rubalcaba and Chick Corea, to cite but a few, graced local festival stages. Given Pérez's role as the founder, organizer and perpetual star of the annual mid-January jazz festival in the pianist's native land, his presence is long overdue. And, it's somewhat of a milestone in that Panama, as any Colombian will quickly point out, was once part of Colombia's national territory. Pérez will undoubtedly receive more than a little good-natured ribbing about this historic footnote.

In addition to Pérez, this year's multi-city line-up will also include such revered artists as Puerto Rican salsa and Latin jazz pioneer Eddie Palmieri, the storied pianist and bandleader who will bring his avant-garde brand of salsa to stages throughout the country. Others on the guest list include Brazil's legendary samba-jazz trombonist Raul De Souza, Spanish Harlem Orchestra trombonist Doug Beavers and his all-star Titanes del Trombón (Trombone Giants) ensemble, conguero Poncho Sanchez and his Latin jazz band, guitarist and singer Jose Feliciano, The Bad Plus, German bebop and fusion trumpeter Till Bronner, Jason Marsalis and his Vibes Quartet, Colombian percussionist Samuel Torres, Puerto Rican conga master Richie Flores, and the venerable Colombian pianist Edy Martinez & His Jazz Orchestra, noted for his work with salsa and Latin jazz star Ray Barretto in the 1970s. Add to that the presence of such salsa stars as Puerto Rican soneros (lead vocalists) Ismael Miranda and Adalberto Santiago and trumpeter Luis "Perico" Ortiz. Filling in the gaps are homegrown Colombian groups and artists from Spain, Israel, the Dominican Republic and elsewhere. When it comes to variety, albeit with a nod to salsa and other Latin styles, eclectic programming is the norm in the world of Colombian jazz festivals.