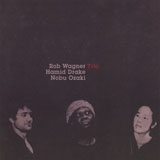 With time to reflect on the Katrina tragedy, jazz artists with ties to New Orleans have been emerging to tell their stories. Kidd Jordan, William Parker, Hamid Drake, Kali Z. Fasteau, James "Blood" Ulmer and the Dirty Dozen Brass Band are among those who have committed their concerns to tape. Accompanied by drummer Hamid Drake and bassist Nobu Ozaki, saxophonist (and New Orleans native) Rob Wagner delivers his own take on the event.

As a creative modernist with regular gigs in the Big Easy, Wagner's mere presence invalidates the prevailing stereotype of New Orleans as nothing more than a bastion of jazz traditionalism. While Wagner has favored the trio format over the years, this is his first session with Drake and Ozaki.

Wagner's aesthetic skirts the craggy extremism of free jazz without ever falling headlong into the abyss. Stretching meters and phrases on his array of horns, he employs myriad effects and extended techniques with expressive vocal intensity.

Favoring his stout, dark-toned tenor, Wagner's inventive phrasing incorporates flutter tongue effects, false fingerings, multiphonics and trills, all augmenting the harmonic conception of his animated statements. His soprano work is vigorous, but not histrionic. On clarinet, he occasionally invokes the Hassidic linearity of his other regular gig, The New Orleans Klezmer Allstars, while plying a shadowy, mysterious tone.

Drake's mesmerizing harmonic permutations are essential foundations for the trio, whether summoning invigoratingly tuneful phrases on a traditional drum kit or generating hypnotic ethnic patterns on frame drum. His interaction with Ozaki is similar to his work with his closest associate, bassist William Parker. Ozaki proves a worthy partner, parrying Drake's complex polyrhythms with a sinewy, melodic foundation and a spry capacity for modulating tempos.

From the reserved bluesy meditation of "Plutino," the swirling exotic travelogue "Where Is Home?" and the roiling free bop of "Shock, Awe, Shame" to the supple balladry of "La Madrugada" and the abstruse funk of "Childhood Memory," the trio explores a mix of post bop influenced styles and genres with a colorful, nuanced palette. Despite the tragedy it recalls, this trio effort is another winning document of the continuing viability of New Orleans.

Visit Rob Wagner on the web.