BY MARK CORROTO
September 1, 2000
Sign in to view read count 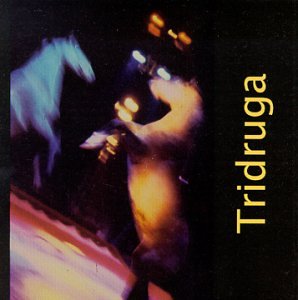 Apologies to Huey Lewis, but it is indeed so very hip to be square these days. Instruments like the clarinet and accordian are making their way back into jazz today. The trio of ‘three friends’ is a translation of Tridruga and at its very hip center is accordionist Yuri Lemeshev. Guitarist Brad Shepik, a fan of eastern music whose bands, Dave Douglas Tiny Bell Trio, Paradox Trio, The Commuters, and Pachora all seem to sample Eastern European folk music, plays the acoustic sounding board to Lemeshev. The third member Tony Scherr is a veteran of the downtown bands of Bill Frisell, John Scofield, Sex Mob, Slow Poke, and Lounge Lizards.

The music they make reminds me of Evan Lurie’s Selling Water By The Side Of The River, released a decade ago. What that successful record, and others of Downtown musicians, did was open up Eastern European folk music to young American composers. Since then we have heard an avalanche of folk music from the Balkans to Palestine. Our definition of jazz has expanded from it’s New Orleans origin, the coming together of Cajun, Caribbean, and African music, to include the swing of Klezmer, the romance of Tangos, and the hypnosis of Arab music.

Tridruga’s “Wind Cries” not for Mary but the Russian Countryside and Lemeshev’s “Potato Head” is not Satchmo’s blues, but it packs a similar romantic jolt. Shepik’s taste for folk is unrepentant. Here he plays all acoustic guitar, not Django Rheinhardt but certainly of Eastern European roots. The three friends and their accordian, guitar and bass give us a very personal, visceral, and intimate music.