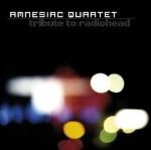 The opening "Everything in its Right Place" settles into a soothing groove with Paindestre's enveloping Rhodes vamp and Theuillon's mellow rendering of the melody, eerily recalling the timbre and inflection of Radiohead vocalist Thom Yorke. The saxophonist weaves an interesting solo over the building intensity of the rhythm section. The boisterous "Morning Bell" is given a similar adherence to the original; loose yet faithful in spirit. Here, Paindestre's Herbie Hancock-influenced lines are especially poignant over Paganotti's rolling snare drum pattern.

The quartet embraces a somewhat lighter approach with the repetitive minor-key waltz "A Wolf at the Door," featuring a memorable bass solo by Florent and the hauntingly expressive ballad "Sail to the Moon." The latter emphasizes communal expressiveness over individual showmanship. The closing "I Might Be Wrong" lays out a lyrical theme over an ultra-funky bass and drum vamp with Florent's pulsating bass lines high up in the mix. The tune's feel is reminiscent of late 1970s Weather Report with Theuillon revealing a Wayne Shorter influence.

With a tight ensemble sound and exceptional soloing, Amnesiac Quartet maintains the inherent beauty heard in the music of Radiohead while tapping into seemingly unlimited potential for future improvisers interested in unique source material.

Everything in its Right Place; Morning Bell; A Wolf at the Door; Sail to the Moon; I Might Be Wrong.