By Edward Blanco
November 29, 2007
Sign in to view read count 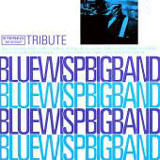 A legendary regional ensemble from Cincinnati, the Blue Wisp Big Band has, for the last twenty-five years, performed every Wednesday evening at the famed Blue Wisp Jazz Club in Cincinnati, owned and operated by Marjean Wisby until her passing in August 2006. The album pays Tribute to the memory of the late owner and also celebrates the music of jazz giants, among them Horace Silver, Freddie Hubbard, Joe Henderson and Billy Strayhorn.

Having been around for a quarter of a century this big band knows how to play and does so with the same fire that has led them to record five acclaimed albums over the years. The musicians are seasoned pros with twelve of the sixteen players being original members.

Recorded live at its new location on East 8th Street in downtown Cincinnati, these old timers, who can obviously still play, crank out eleven swinging tunes and seem to have a blast doing so.

The music is lively and buoyant, including a slew of sturdy solos from various players. The music bolts out of the gate with the energetic opener "Sweet Georgia Brown and rumbles through the set in brassy fashion, continuing with Silver's "Strollin' and ending with George Gershwin's "Soon, showcasing arranger Piller on the bones and Herb Aronoff on tenor.

This is the kind of big band music that aficionados of the genre can appreciate and love to hear often. Tribute demonstrates just why the Blue Wisp Big Band is still around and producing some of the finest orchestrations you'll hear anywhere.

Containing world-class horn players and bolstered by a superlative rhythm section, this group has established a reputation that extends far beyond Cincinnati and will hopefully keep them playing for years to come.