BY DAN MCCLENAGHAN
November 28, 2007
Sign in to view read count 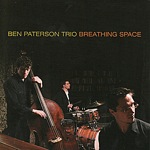 If Ben Paterson and his trio had come along in a different time, they might have been tagged by Miles Davis as his backing band. In the mid-fifties, Davis was searching for an Ahmad Jamal sound, and settled in with Red Garland in the piano chair to fill that spot. Buoyant swing with the ability to segue into interludes of the light, sparkling touch is what Davis got with Garland, then the more introspective Bill Evans, and later the more effervescent Wynton Kelly.

Listening to Breathing Space, the Chicago-based debut of the Ben Paterson Trio, it's no surprise that Paterson cites influences of Bill Evans, Ahmad Jamal and Oscar Peterson. The group swings easy and Paterson sparkles.

Opening with Benny Golson's "Whisper Not," bassist Jake Vinsel and drummer Jon Dietemyer lay down a solid foundation and some serious swing behind pianist Paterson. It's a vibrant sound, with lots of interaction and plenty of dancey keyboard zest as well as an assertive bass solo backed by some some relaxed Paterson comping.

"I Thought You Should Know," a Paterson original, has a bouncy, gregarious groove; and Gigi Gryce's "Hymn of the Orient" sizzles and pops. Miles Davis' "Nardis" finds Paterson and his trio-mates sounding very incisive and convivial. "I Wish I Knew" showcases the trio in a wonderfully wistful ballad mood; and on Scott LaFaro's "Gloria's Step," Paterson and company invite the inevitable comparison to the Bill Evans Trio of Sunday at the Village Vanguard (Riverside, 1962).

Breathing Space is an assured and auspicious debut, a fine set in the classic piano trio mode.

Whisper Not; Alice in Wonderland; I Thought You Should Know; Hymn of the Orient; I Wish I Knew; Nardis; Dancing in the Dark; Manorism; Gloria's Step.