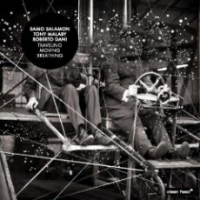 Slovenian guitarist/composer Samo Salamon has made the bassless trio a recurring format. It offers space for his most open composing and playing: a situation where the amount of harmonic anchoring in the arrangements is largely up to him. As the only chordal instrument he can supply a harmonic framework, or float freely around his compositions in tandem with the horn. As he has worked with the combination the music has tended to become more free: often rubato, more outside harmonically, less tied to the compositional structures.

"Dephony" opens the set with rubato drums: guitar and tenor saxophone come in with the ominous theme. Salamon takes a long over-driven guitar solo, accompanied by Malaby's saxophone. "Moving Target" is dominated by a free conversation between guitar and tenor, but Dani finally joins in for a jerky groove. "Breathing" is a collective improvisation (a common feature in Salamon's recent albums) largely led by Malaby's saxophone. In fact the first half is a quiet saxophone/drum duet; when Salamon enters he mostly plays rhythmic accompaniment, so rhythmic that it sometimes blends with the drums.

Both "Grey Matter" and "Kei's Dream" function as ballads. There are a whole series of Salamon compositions with his wife Kei's name in the title—the most frequently recorded ones are "Kei's Secret" and "Kei's Garden"—so this new one joins a well-established tradition. "Traveling Without Motion" includes extended unaccompanied sections for tenor saxophone and guitar. Clearly the bassless trio requires playing partners who can embrace the freedom that Salamon is offering. "Pedro Is Clean" ends the set on an upbeat note, with a riff-based head that sounds more like the earliest bassless trio albums.