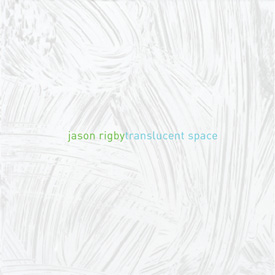 Modern jazz saxophone is healthy—a wealth of talented young horn players are proving their own merit in the genre. New York based Jason Rigby shows he also has what it takes on as serious player and composer on Translucent Space. Rigby has performed with seminal artists like pianist Kris Davis (Life Span, 2004) and bassists Eivind Opsvik (Overseas , 2003) and Bob Sabin (Killdozer, 2005). The company Rigby keeps says a lot about him. His partners share a proclivity towards modern music, be it frenzied rock, urban beats or new mainstream ideas. His debut, Translucent Space, is a real contender, showing multiple personalities and an adventurous spirit.

While fans are quick to speak about the who's who of new sax players, Rigby is as bright as the next, extrapolating a variety of styles and delivering them in a contemporary setting. On atmospheric pieces such as "Proximo, lush and dissonant clarinet/flute/sax patterns smoothly contrast against a flowing tempo. Rigby blows with soulful tones or quickly bops it true on "Turquoise Turkish with primary bandmates Mike Holober (piano), Cameron Brown (bass) and the phenomenal Mark Ferber (drums).

There's even some street-level funk on "Southampton, with pan-like percussion, but the groove can also be found on more intricate pieces like the aptly titled "Atmospheric, where the group announces the somber melody with loose improvisation. The free jazz implications of "114 (with guest trumpeter Rich Johnson) bring to mind the ideas of Ornette Coleman and Don Cherry. Rigby is strong and confident, but he also allows risk-taking, moving comfortably out of the mainstream into freer territories.

Rigby, a multi-instrumentalist, plays wood flute on the bouncy "Mumbai, bringing a Middle Eastern aura to the music. The recording comes to a satisfying conclusion with the gorgeous "Christopher, where his quartet is augmented by the striking cellist Lauren Riley, who shares the spotlight with Rigby's powerful free tenor play. Given this stellar debut, it will be quite interesting to see where Rigby's musical ventures will lead next.