Maximize your visibility at All About Jazz by upgrading your musician page from standard to premium. With it, you'll receive All About Jazz home page exposure, a highly stylized / ad-free musician page with bonus features and benefits, an ad, plus you control where you sell your music and so much more.
Learn More
653 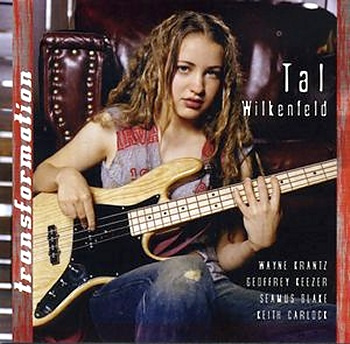 Some artists emerge slowly, taking years to find their way to public attention; others leap seemingly instantaneously into the public eye. Australian-born, US-based bassist Tal Wilkenfeld has gone from sitting in with Allman Brothers Band in 2006 to working with pianist Chick Corea and Jeff Beck, heard recently on the guitarist's Performing This Week...Live at Ronnie Scott's (Eagle Records, 2008). What's not apparent on Beck's CD—but can be seen on the DVD version of the same release—is his almost constant state of disbelief when watching the diminutive, early-twenties Wilkenfeld. There are plenty of bassists with staggering technique and chops, but few can make the instrument truly sing, as Wilkenfeld does on Beck's CD during an all-stops-out solo on Stevie Wonder's "'Cause We've Ended as Lovers."

Wilkenfeld possesses all the requisite chops and uses them to terrific advantage on Transformation, her 2007 debut as a leader, released prior to hitting the road with Beck. As with Beck, she proves herself a potent groove-meister, in this case working hand-in-glove with Keith Carlock, best-known as Steely Dan's recent drummer of choice, both on the road and on its last release, Everything Must Go (Reprise, 2003). The grooves are rich and visceral on this set of Wilkenfeld originals (one, the beautifully balladic "Truth Be Told," co-written with Transformation's keyboardist, the ever-tasteful Geoffrey Keezer), with solo space aplenty and a less restrictive format allowing Carlock greater freedom than in The Dan's more defined context.

Possessing a deep lyricism rare enough in electric bassists, but especially in this largely fusion-esque context, Wilkenfeld's a fingers-only player who largely eschews string-popping and slapping techniques, though she heads for that territory briefly on "Serendipity," managing to be be both rhythm anchor and lead voice. Largely, however, she aims for a warm tone and a way of sliding in and around her notes reminiscent of ex-Weather Report bassist Alphonso Johnson and King Crimson/Peter Gabriel alum Tony Levin.

Wilkenfeld's writing is filled with knotty, often high velocity lines either in counterpoint or concert with guitarist Wayne Krantz, who delivers some of his most focused, funkified and harmonically outré playing in years; a strong foil for Wilkenfeld and a player who's always deserved more cred than he's been afforded. Saxophonist Seamus Blake, normally heard on more modern mainstream settings, combines spare soulfulness with bop-inflected lines on the medium tempo "Table for One," while Keezer delivers one of his best solos of the set on the fierier "Oatmeal Bandage," while also features a rare solo spot for Carlock that suggests he, like Krantz, deserves considerably more attention.

But even when the music is filled with complex, intertwining lines that prove the mettle of everyone involved even as they avoid any trappings of excess, it still grooves in a booty-shaking way—even when Wilkenfeld challenges with shifting meters. For those who've discovered Wilkenfeld via her work with Jeff Beck, the thoroughly exciting Transformation provides an even broader window into this remarkable bassist with a promising future.

BC; Cosmic Joke; Truth Be Told; Serendipity; The River of Life; Oatmeal Bandage; Table for One.