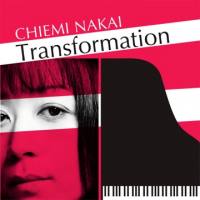 New York-based pianist Chiemi Nakai is a native of Japan who began her musical journey in training as a classical pianist but preferred the sounds of Afro-Cuban and other Latin music. Moving to the Big Apple in 1998, Nakai began her professional career performing and touring with international Latin music stars, formed her own group, Chiemi Nakai & the Afro-Cuban Jazz Project and then teamed up with Latin jazz percussionist Emmanuel Bizeau and recorded her debut album Bridges (Self-Produced, 2008). Transformation is her second album as leader containing all original compositions with a decidedly contemporary flair that also possess strong elements of the Latin sound, her preferred style.

For this album, Nakai keeps the band small preferring to record with in a standard piano trio format using several different musicians for the project. As a Latin music artist,it was only natural that she would draw on players of the style and as such, recruits Pedro Giraudo and young Luques Curtis sharing the duties on bass. On the drum set, Nakai uses Puerto Rican drummer Francis Benitez on three tracks and calls on Cuban drummer Mauricio Herrera—who provides a strong performance—filling in on the playful Afro-Cuban burner "I Will Meet You Again."

The music opens up in fiery fashion with the hard-driving Latin-tinged heater, "Volver" where the pianist makes an immediate impression on the keys with her quick right-hand finger-play. It's bassist Giraudo who follows with impressive bass work of his own on "The Flying Gray Cat" with drummer Benitez also weighing in on superb solo spaces. The pianist goes it alone with a delicate solo performance on the title track "Transformation 1," displaying a bit of her classical training on a beautiful non-Latin piece of music that helps define the album.

The short program ends on the appropriately-titled "Heaven Is Here," helping to document one of the better trio sessions around today. Japanese pianist Chiemi Nakai is a sensational pianist and composer by any definition who—with Transformation, her second effort—makes a successful transformation from a Latin-genre star to an up and coming contemporary jazz pianist on the move. No question about the music, it's terrific. Unfortunately, with only a handful of tunes barely qualifying as an EP, one is left wanting much more than what is offered.

Volver; The Flying Gray Cat; I Will Meet You Again; Transformation 1; Heaven Is Here.