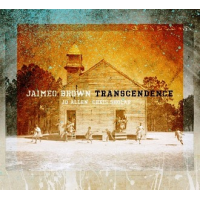 One of the more thought-provoking releases to come along this year, drummer Jaimeo Brown's Transcendence is an ethnomusicology patchwork with elements of the blues, gospel, rock, and modern jazz. Inspired by Gee's Bend, Alabama—an African American rural community formed in the early 1800's that is steeped in vibrant music and art—Brown's project conjures the voices of the past and imparts his own language to the town's deep history and relevant present.

A drummer with explosiveness and touch, Brown recruits saxophonist JD Allen who has garnered critical acclaim for his emotive playing and soulful recordings. Add to this, some back-country blues and gritty rock from guitarist Chris Sholar and contributions from the esteemed pianist Geri Allen in the moving "Power of God." Brown leads these and other artists through a wide range of emotions with thunderous rolls or tender cymbal caresses in twelve aural soundscapes.

Splicing voice samples of sacred music with free flowing improvisational changes, the compositions are both evocative and intriguing. The juxtaposition of dissimilar but common voices is arresting in "Somebody's Knocking" and "I Know I've been Changed" which incorporate black spiritual music with the exotic talent of East Indian vocalist Falu or the Old Meter Hymn sampling of "A Charge To Keep I Have" at the end of the mesmerizing "Patience." The gut wrenching emotions expressed in "You Can't Hide" and "This World Ain't My Home" speak of life's hardships whereas the sweet repeating lullaby "I Said" includes the voice of Brown's 2-year-old daughter, Selah. Throughout the project, Brown and the other musicians deliver performances that are inspired and fervent.

Gee's Bend's history represents community, strength, and perseverance. It's also about the ingenuity displayed in the renown quilts created by the town's women; beautiful works that have been celebrated in museums, documentaries and projects by other jazz artists such as Jason Moran's commissioned work for The Philadelphia Museum of Art in February 2013. Brown's project is equally memorable as he splendidly adds his own unique identity to the patchwork with this auspicious release.

Mean World; Somebody's Knocking; Patience; You Can't Hide; Be Free; Power of God; I Know I've been Changed; I Said; Baby Meish; Accra; You Needn't Mind Me Dying; This World Ain't My Home.