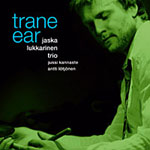 This is an album with origins deep in the heart of the Finnish nu-jazz fraternity, featuring three alumni of the Folk and Jazz Department of the national Sibelius Academy. However Jaska Lukkarinen has learned more than just percussion and drums, having spent a season at the Manhattan School of Drumming, where the concept of a drum-led jazz trio took root.

Encouraged by his mentor there, John Riley, and inspired by music such as Dave Holland's Triplicate (ECM, 1988), Kannaste started to write. On returning to his homeland, he sought out two of its leading musicians to fill the bass and sax duties. Bassist Antti Lötjönen brings a wealth of experience from recent years with two of his country's leading international successes, theIlmiliekki and the Five Corners Quintet, where his sturdy but sensitive authority is easily recognized. He has even found time lately to extend his remit and record with another new band, the local Sun Trio. Saxophonist Jussi Kannaste has also worked with many of the country's leading artists, including the UMO Jazz Orchestra, as well as leading his own outfit, the Kannaste-Ojajärvi Quartet (or K/O/Q).

Despite the covert nature of his leadership Lukkarinen has selected his band so as to maximize the directness of the music. Lacking an overt rhythm instrument, the lines are clearly delivered with simplicity and little ornamentation, requiring great confidence of the players. Most were composed on the leader's old keyboard during his stay in the States, living in a garret in Harlem. The location of the recording could hardly have been different: a cabin deep in the Finnish forests, where the stove was burning throughout the recording process, maybe adding to the direct, warm feel of this disc.

Starting with Charlie Parker's "Segment," the album is thankfully everything but a John Coltrane tribute. "Kiss of Joy" is penned by Kannaste, and the title track is redolent of Gillespie's "Salt Peanuts." Both "Trane Ear" and "Signal" are good examples of this full-bodied, hearty sound and, like most of the album, are written by Lukkarinen. Despite his apparent lack of prominence in the music all credit is due to the band leader for assembling a group well able to approach Coltane's intimacy and produce a witty and warm collection of original work.

Segment; Stewardess; Double Fault; Mh2Ym Aka Substitute; I Guess I Had Something; Trane Ear ;Signal; Seven Steps To Heaven; Kiss The Joy.