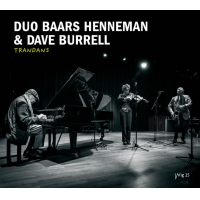 Dutch multi-reedist Ab Baars has been active, mostly in Europe, since the 1970s, recording for several labels on the continent and touring in both rock and jazz capacities. His unique style had been dubbed "Ab Music" by the late Misha Mengelberg with whom he had recorded Circus (Instant Composers Pool, 2006) along with Han Bennick. More recently he teamed with Ingrid Laubrock, Tom Rainey and violist Ig Henneman on Perch Hen Brock & Rain (Relative Pitch Records/Wig, 2016).

Henneman again joins Baars on Trandans. The musical, and life partners had toured and recorded as Duo Baars-Henneman on Autumn Songs (Wig, 2013), their second duo release. Henneman has worked as a violist in orchestra settings as well as with her own rock group and jazz quintet and sextet. Dave Burrell needs little introduction. The pianist has worked in groups with saxophonists Archie Shepp and Pharoah Sanders, composed for a jazz opera and has been recording as a leader since 1968's High Won-High Two (Black Lion). He received high praise for his album Expansion (High Two, 2004) which featured William Parker and Andrew Cyrille.

The duo invited Burrell to join them at a concert at the Bimhuis, Amsterdam, in September of 2016 where Trandans was recorded. The eight compositions are group improvisations that often center on Baars choice of instrument. The title track opens darkly with Burrell's well-spaced chords and notes and the drone of Henneman's viola. It takes on more shrill properties as Baars enters with the shakuhachi, a traditional Japanese flute whose sound can range from the depths of a didgeridoo to something akin to the braking of a subway train. "Fyllevägen" and "Dis vid Hulan" follow and, as with most of the album's material, the improvisations are more about textures, silence and tones rather than song structure.

The first real explosion of sound occurs on "Laggarebo," a twelve minute improvisation played out in episodes that include Baars running the upper and lower registers of the tenor. Further into the piece, Henneman uses her viola as a fiddle for an unexpected bit of hoedown. Much of the closing "Korsekebacken" is given over to Burrell who essentially performs an avant-garde solo for much of the eleven-plus minutes before Baars joins in on clarinet.

The live recording often segues from track to track without interruption and the audience is not heard until the set is completed. While there are melodic segments throughout, the parts are very open, but controlled. The overall tone is not at all harsh though the high ends of the flute, viola and piano working in tandem can occasionally be penetrating. Fortunately, these passages are limited and balanced with reflection. Trandans is interesting music with an audacious spirit.