Faun and a Pan Flute: Traffic

By DAVE WAYNE
September 8, 2016
Sign in to view read count 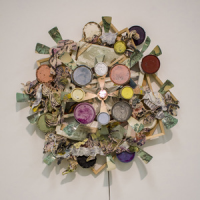 Atlanta, the home of OutKast, CeeLo Green, Usher, and really the whole "Dirty South" hip hop thing, is not a place normally associated with bands that play super-complex all-original instrumental art-rock. So, you may have to pinch yourself when you hear Traffic by Atlanta-based prog-rockers Faun and a Pan Flute. And to be totally frank, "prog-rockers" is a pretty poor choice of adjectives to apply to this strangely-named nonet. Starting out as an indie-rock / post-rock outfit with a female vocalist, the vicissitudes of life and the comings and goings of various band members re-routed the band's stylistic center through several post-rock and prog-metal-ish incarnations before landing in a sphere that has much more in common with European-based movements such as Belgian Darkwave (i.e., Univers Zero, Art Zoyd, etc.) and Rock In Opposition (e.g., Henry Cow, The Muffins, etc.) than pretty much anything else going on in the States at the moment. Faun and a Pan Flute's music is also completely instrumental, unlike similar-ish US-based ensembles such as Sleepytime Gorilla Museum and Thinking Plague.

Regarding the name, Faun and a Pan Flute used to be one of those bands that changed their moniker for pretty much every gig they played. It became a bit of a joke that semi-backfired when they did several gigs in a row with the worst band name they could think of... and it stuck. Oh well. Fortunately, these guys do not take themselves too seriously.

Comprised of conservatory-trained classical musicians, self-taught ex-metalheads, and super-motivated guys with day jobs, the band's cooperatively-written compositions are a crazy quilt of interlocking sections during which different instrumental combinations come to the fore as others drop into the background. And though the music on Traffic possesses the forward motion of the best fusion and progressive rock, the modus operandi on this EP does not include improvisational solos. In essence, Traffic is an album of through-composed pieces that have more in common with contemporary classical music. Unlike classical musicians, the band does not utilize written scores in performance. All of their music is highly rehearsed and committed to memory. Thus, their musical flow comes completely from the jazz / math rock / prog continuum.

To give a blow-by-blow description of the three pieces on this EP would be boring. Each of the pieces here are different, and each balances turbulent energy with meditative rubato, dense interplay with wide-open duos and trios, and sweaty, hypnotic rhythms with near-ambient soundscapes (produced without the use of synthesizers or samplers). The instrumentation, though heavily tilted to the percussive (drum set, percussion table, marimba) and the low-end (tuba, electric bass, and cello) sides of the sound spectrum is surprisingly clear, precise and un-muddy. Chalk that up to the band's superior arranging skills.

Faun and a Pan Flute might just be the most remarkable band you've never heard of. Suffice it to say that fans of all of the previously-mentioned bands would do well to drop everything and investigate their music. Now.

About Faun and a Pan Flute