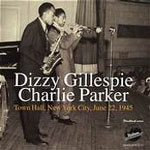 After the recent bonanza discovery of the 1957 Monk-Coltrane Carnegie Hall concert, this previously unissued recording of a 1945 Gillespie-Parker concert may strike some listeners as anticlimactic if not somewhat disappointing. There's no denying its historical significance—the only extended "live" recording of Diz and Bird from this seminal period—but collectors who have the Parker Dial and Savoy studio dates along with the 1947 Diz and Bird Carnegie Hall performance, the 1951 studio session on Verve, and the celebrated Massey Hall concert of 1953 will find few surprises on this latest addition to the Gillespie-Parker discography.

The accompanying photo of the pair as skinny (literally), boyish-looking musicians belies the mature competence and pyrotechnical command of their playing. Yet to my ears the music never really catches fire. For a change, both of these progenitors sound like mere mortals, or a couple of guys playing one gig while thinking about finishing in time to catch the next one later that night. They're not "getting after" each other like gladiatorial archrivals locking horns, and the rhythm section, while flowing and assured, does little to stoke any flames. Bird's four-bar break on "Night in Tunisia" is played at a level probably beyond the conception, let alone execution, of any other musician, but it's clearly not up to the melodic/rhythmic complexity of the incredible 1947 recording.

The sound quality is adequate, perhaps more "spacious" and life-like than the later Massey Hall recording. Unfortunately, the bass has the same faintness as the other 1940's recordings featuring these musicians, and Roach appears not to have developed the forceful drive that would become the hallmark of his later playing. Al Haig sounds competent but relatively bland and predictable (his solo on "Groovin' High" contains not one but two simple Eb major scales), especially compared to a Monk or Powell. It's good to hear Don Byas on the first track and the misplaced Sid Catlett (a swing-style drummer who combines a Krupa bass drum pulse with quick, light hands) on "Hot House." The solos are slightly extended, with both instrumentalists taking one more chorus than is the case on the 78-rpm studio releases.

For a few moments I felt like a member of the audience, closer to Diz, Bird, and the 1945 milieu than ever before. A nice visit, but one that frankly is unlikely to bear much repeating.