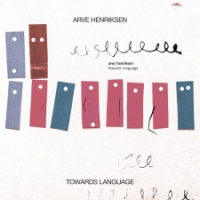 Following hot on the heels of Rimur (ECM, 2017), Towards Language is Arve Henriksen's second album of 2017 and brings his tally of releases to ten in the past five years. One of the more remarkable things about Henriksen is that even though the quantity of releases increases, their quality remains as high as ever. All of the hallmarks that make his music distinctive are still in place, as good as ever—the haunting melodies, soaring falsetto vocals and exquisitely beautiful trumpet. His sound is as individual as a fingerprint, the true mark of a great player.

Studio-recorded over two days in August 2016, Towards Language consists of nine tracks, of which the longest runs for just seven-and-a-half minutes. Such concentrated, economical music has typified Henriksen's output on such classic albums as Places of Worship (Rune Grammofon, 2013) and Chiaroscuro (Rune Grammofon, 2004). Henriksen has always stressed the importance of his collaborators in the creative process and, as on those two albums, here he is again joined by the team of Jan Bang and Erik Honoré of Punkt, the presence of whom is practically a guarantee of success. As before, the pair display their knack of constructing uncluttered environments that perfectly frame Henriksen and allow him to be heard to best advantage. Guitarist and electronicist Eivind Aarset is also present on every track and was involved in writing each one; he adds subtle shading without in any way deflecting the limelight from Henriksen.

Anna Maria Friman of Trio Mediaeval (with whom Henriksen recorded Rimur) sings on the album's closing track, "Paridae," a traditional "kven" or ancient Nordic song, her voice and Henriksen's trumpet combining in a perfect blend. On other tracks, it is left to his own voice and trumpet to conjure up an ambiguous mix of emotions that include melancholy and wistfulness. The end result is yet another stunningly beautiful set from Henriksen.